A Time For Work 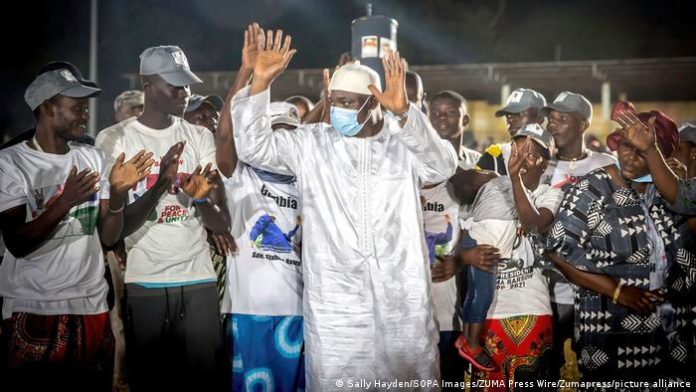 President Adama Barrow has an another opportunity to make history or, if he blows it, be consumed by it.

In December 2011, presidential elections were held in The Gambia, with the incumbent President Yahya Jammeh contesting for what would be his fourth term in office. President Jammeh was confident he would win “unless all Gambian people [were] mad” because he had, in 17 years, done more for them than the British had in 400 years of colonial rule. In the event, President Jammeh won the elections with 72 percent of the votes cast, compared to 17 percent for the runner-up opposition candidate, Ousainou Darboe of the United Democratic Party (UDP).

I distinctly recall that following the confirmation of the results of the 2011 presidential elections, hordes of youths were dancing and singing in the streets, celebrating President Jammeh’s victory. I met with a group of them singing in unison: “We don’t want old Pa; we need Yaya!” in reference to “Old Pa” Darboe, who is about 17 years older than Jammeh. I remember, too, feeling very sorry for President Jammeh because I thought to myself: it would be ugly the day these very youths in support of Jammeh turned against him.

I didn’t have to wait for long, because five years later, the relationship about Jammeh and Gambian youths soured. In December 2016, President Jammeh narrowly lost the presidential elections — a loss that shocked all Gambians, Jammeh included. In a hard-fought election, Jammeh was narrowly defeated by Adama Barrow, who received 43.3 percent of the votes cast, compared to 39.6 percent for Jammeh. Barrow’s surprise victory over Jammeh was mainly because of a Coalition of seven opposition parties and civil society formed in October 2016.

Fast forward another five years, and President Barrow faced Gambian voters again earlier this month to seek a second term in office. Despite reneging on his earlier promise to serve a three-year transitional term, his falling out with the UDP, allegations of corruption and ineptitude, as well as his alliance with the APRC who had vigorously defended former President Jammeh against charges of killings and abuse of human rights, President Barrow had a resounding victory in the 2021 presidential elections, with 53 percent of votes.

Although the UDP has launched a legal challenge to the election results, local and international observers, including the African Union, ECOWAS, the EU and the Commonwealth endorsed the results, and some contestants congratulated President Barrow on his victory. For all practical purposes, the die is now cast, and President Barrow will serve his second five-year term.

So President Barrow and his supporters celebrated wildly and into the night following their election victory. Although I did not hear youths chanting “We need Barrow” as they said they needed Jammeh in 2011, there were many and loud chants of “Weew Barrow!”, “weew” being a corruption of the French word “vive” meaning “Long live.” And I wonder when (if indeed) the very crowd which celebrated President Barrow’s victory would turn against him, like the youths did against former President Jammeh.

Singapore’s founding father and first Prime Minister, Lee Kwan Yew, had good reason to cry following Singapore’s separation from Malaysia in 1965; the same year The Gambia got its Independence from Britain. Yew focusedon Singapore’s survival as a nation and creating better lives for its people. Toward this end, Singapore adopted an export-led industrialization, and sought global multinational corporations to drive its industrial growth. As a result, Singapore increased its per capita GDP from $500 (about $3,600 in 2011 USD terms) in 1965 to $22,666 in 1990, and $68,408 in 2018 (both in 2011 USD terms). Singapore was ranked 11th out of 189 countries in terms of its HDI in 2020, ahead of the UK, the US and Canada.

Nobody expects President Barrow to, by the end of his second term in 2026, turn The Gambia into another China, or Rwanda, or Singapore in terms of economic development. However, he is in a unique position to lay the foundation for The Gambia to achieve economic development and eradication of poverty. To do that, he needs to make a good-faith effort to implement the recommendations of the Truth Reconciliation and Reparations Commission (TRRC), the Draft Constitution prepared by the Constitutional Review Commission (CRC), and Janneh Commission on former President Jammeh’s financial dealings. In addition, he should complete reforming the security sector, and curb corruption in his administration and among his inner circle.

President Barrow needs a solid team that will help him deliver on his promises to the Gambian people. In this regard, he should reform the entire upper echelon of the civil service by recruiting a new team based on merit. As things are now, I have never met a senior government official (Directors, Deputy Permanent Secretaries, and Permanent Secretaries) who could tell me s/he was in office because of his or her CV, or through a competitive and open hiring process. Besides, many of them (some Ministers included) are holdovers from the Jammeh administration, prompting many to lament that Barrow’s first term was more a regime change, than a system change.

Following his recent victory at the polls, President Barrow and his supporters are understandably still euphoric. The reality, however, is that he has a stark choice ahead of him: he either does a good job of leading the development of the country, or he dashes their hopes, as he did with his first term in office. In the latter case, he can be sure that the very youths, and indeed all Gambians who are celebrating his victory today, will turn against him, and get out in the streets calling for his head. And he would have nobody to blame, but himself.