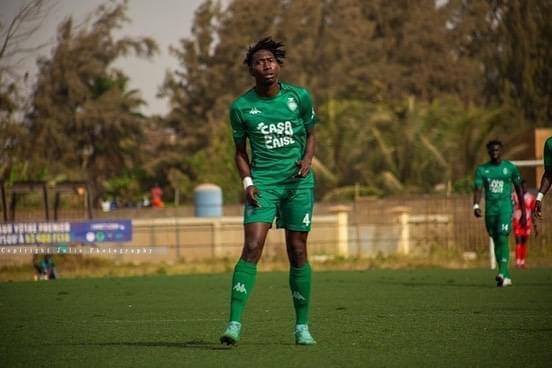 Casa Sports Gambian midfielder, Alasana Faye has said that he is optimistic about winning his first-ever league trophy in Senegal as his team sits on top of the Senegalese top football league table standing with 9 games to play.

Paco, as he is fondly called, is on loan in Casa Sports from BK Millan, after the latter’s relegation to the second tier of Gambian football end of last season.

“I am having a good season with the team and this gives me hope that we will win the league at the end of the season”, the combative midfielder told this medium.

Casa Sports triumphed over Generation Foot last weekend by a goal to nil in a top of the table clash. The triumph rolled them on top of the league standing, two points clear from the second spot occupant, Generation Foot.

The 21-year-old agile midfielder is an integral part of his side and has been playing week in and week out for Casa Sports.

Struggled during the advent of the league due to injury, the midfielder has regained his fitness and featured for the Cassamance based team playing as a robust defensive midfielder providing security to the defenders.

“Playing every week is paramount for my progress and I can’t be happier than this. The league is very competitive and well organised. I have recovered fully and the objective now is to win my first league title as a footballer”. Faye enthusiastically told The Fatu Network.

Faye’s loan with Casa Sports will end at the end of the season. His objective, in addition to winning the league, is to sign a professional contract.

Casa Sports will be playing Linguere FC this weekend as they prepare to maintain their lead on the table standings.