Why UDP lost the 2021 presidential election 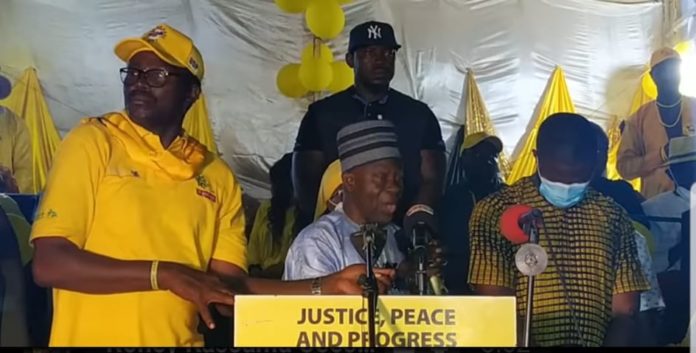 Late Joseph Goebbels, chief propagandist for the Nazi Party, said something along these lines: repeating misinformation does not make it true, but it can make it more likely to be believed. Indeed, it was Adolf Hitler’s Minister of Propaganda, Joseph Goebbels, who said: “If you repeat a lie often enough, it will become accepted as truth.” Psychologists call this phenomenon the “illusion of truth effect”.

Relatedly, two people can also look at the same glass and see completely different things. In other words, some view the glass as half-full, while others see the glass as half-empty, and this manifestation is referred to as “perception” by psychologists. Needless to say, our perceptions profoundly impact how we approach matters or things in life. Therefore, the lesson to learn is that the power of perception cannot be underestimated, and one ignores it at his or her own peril, as the UDP leader, Ousainu Darboe, has just found out the hard way, in this year’s presidential Election. But more on that later. In effect, perception, not necessarily factual; yet, it can, nonetheless, feel very real and can actually mould, shape, and influence how human beings approach situations and make decisions. In fact, perception can be said to be the lens through which we view people, events, form judgements and make decisions.

Regrettably, in my view, Ousainu Darboe’s political frailty, by and large, had, all along, been caused by long-standing (unaddressed) perception problems, a case of perception actually altering reality, in that Ousainu Darboe, from the outset, was depicted by many Gambians particularly minorities in The Gambia, as an exclusionist, who was divisive and in the habit of promoting toxic identity politics. Consequently, going forward, this exclusionist tag became a liability for him, politically. His inability to effectively confront these perception problems, head-on, to nip them in the bud, did cost him dearly in political terms, in the end. For over two decades, what psychologists call the illusory truth effect, as mentioned earlier, was well-exploited by Yahya Jammeh, in that Jammeh’s seeds of deceit, that whisper of a misinformation about Ousainu Darboe being tribalistic, blossomed over the years, and became accepted, in the end, as the gospel truth at least by most minorities in the Gambia.

Unfortunately, this age-old propagandist method, first employed by Yahya Jammeh (but actually borrowed from Joseph Goebbels) against his (Jammeh’s) arch political enemy, as mentioned above, appeared to have worked very well, over the years, against Ousainu Darboe and even today that very misinformation about Ousainu Darboe being tribalistic is still being repeated. Therefore, UDP’s problem has been that its leaders have massively underestimated how much “others”, particularly minorities in The Gambia, have feared an incoming UDP government, while, on the other hand, they also overestimated their ability to reach beyond their loyal support base, strong but not enough to deliver victory, as I had forewarned on this medium, ahead of the presidential election. Yet, even to the casual observer of Gambian politics, it was clear that there was an entrenched fear in many quarters within the country, of an incoming UDP government.

Ironically, in post-Jammeh Gambia, the UDP’s popularity, on one hand, peaked to unprecedented levels, but equally, the party was widely loathed, on the other hand, as the presidential election results have just confirmed. That is a paradox, isn’t it? In fact, the paradox of the UDP brand needs to be studied by our scholars at the appropriate time. Where did the problem lie? Did the party itself have an image problem, or was it actually an individual problem to do with the person or image of its leader Ousainu Darboe? Did Ousainu Darboe, in the end, become a liability for the yellow party.

Yet, regardless, history teaches us that the more misinformation is repeated, the more it will be believed to be true. In other words, repetition can make a statement seem truer, regardless of whether it is factual or not. Understanding this effect could have helped UDP avoid falling for this (unaddressed) age-old propaganda against its leader which, in my view, dealt a fatal blow to Ousainu Darboe’s presidential ambitions, as it denied him the Gambian presidency, in the end. The UDP leader’s ineffective fight back mechanism has meant that the so-called exclusionist label, sadly, has stuck not because it fitted Ousainu Darboe but because he let others, particularly his political opponents, define him narrowly over the years, if I may add.

Since 1996, Ousainu Darboe has found himself stuck in a story that many Gambians have cast him in, and with the benefit of hindsight, it is now clear that disrupting these negative narratives, regrettably, has been a total failure, on the part of the UDP leadership. In fact, the illusory truth effect on social media in particular, and how it has affected Ousainu Darboe over the years, also needs to be carefully studied in due course by our emerging scholars.

In sum, the point that I am making is that Ousainu Darboe has, all along, been labelled an exclusionist – a divisive figure – and regrettably, his Achilles heel has been that he had been unable to effectively remove these labels. And in my view, Ousainu Darboe also appeared to have underestimated how much an incoming UDP government was feared by “others”, particularly minorities in The Gambia, not realising that the perception problems he faced since the formation of the UDP in 1996, have actually become a burden or liability for him. In short, various political forces, particularly Yahya Jammeh, have succeeded in shaping what many Gambian voters see, feel, and think about Ousainu Darboe in particular, and UDP more generally. Of course, the end-result being that most minorities in The Gambia – rightly or wrongly – viewed, or at least perceived, the UDP as a party whose modus operandi was exclusion and not inclusion. There was at least a perception among minorities in The Gambia that the party lacked diversity.

In this sense, the UDP’s rebranding effort (at the eleventh hour among the minorities in The Gambia) was too little, too late to save the party’s woes in this key election demographic: minorities. Regrettably, the UDP has had a very poor brand among ethnic minorities, many of whom have accused the party of lacking genuine inclusivity as well as perceiving the “diversity” within the UDP as mere “tokenism”. Interestingly, the UDP made a request at the eleventh hour to have a meeting with the leadership of the Gambia Christian Council (GCC) but that request got a lukewarm response from GCC, as the council’s leaders apparently were not keen on it. In the end, a compromise was reached, and it was later agreed that UDP be first allowed to meet an ad-hoc committee of the Christian Council, after which a decision would be taken from there.

Yet, I would argue that Ousainu Darboe’s reputation as a so-called exclusionist and a divisive figure has been largely a social media construct, of course, fed, over the years, by Yahya Jammeh in particular, and in the end, this has cost him dearly, in political terms. The way “others”, particularly minorities in The Gambia, viewed him, and the way he presented himself did not also help his cause, particularly when he became Foreign Affairs Minister and wielded enormous political power at the time, thereby adding fuel to the fire, as it were. Rightly or wrongly, there was a widespread perception that he promoted exclusionary tactics, favouritism, and cronyism in his former posts of both Foreign Affairs Minister and Vice President. Furthermore, as a president-in-waiting, I think it is also a fair statement to say that Ousainu Darboe was prone to making unforced errors, through poor or tactless decision-making, which no doubt also cast a cloud over his political judgement.

Therefore, UDP losing this year’s presidential election has to be blamed, to a large extent, on a catalogue of errors on the part of the UDP leadership, chief of which included complacency – the party’s ill-advised go-it-alone stance (being too comfortable and confident of victory), and also making the fundamental mistake of allowing others (mainly opponents, especially Yahya Jammeh) to continue to define who the UDP leader was, thereby controlling the narrative endlessly. Interestingly, the UDP did not also like the use of the words, “coalition”, “alliance”. The party’s leaders preferred the “endorsement” of their presidential candidate, as opposed to the formation of a “coalition” or an “alliance”.

In fact, ahead of the presidential election, I personally engaged one or two members of the party’s leadership trying to impress them on the urgency of forming a grand opposition coalition, but they made it loud and clear to me at the time, that they were only looking for “endorsement” from other political parties and not necessarily the formation of a coalition or an alliance. Of course, the other mistake UDP also committed, in my view, was to have seen this year’s presidential election as mere ethnic censuses, in which Gambian voters would vote predominantly for co-ethnic political parties and presidential candidates. For example, I heard a prominent UDP militant repeatedly peddle – on YouTube – very unconvincing arithmetical postulations around the number of registered voters from the respective ethnic groups in The Gambia and how this ethnic arithmetic would favour UDP.

You see, before Adama Barrow parted ways with the UDP, I argued on this medium in 2018 to be precise, that the December 2021 presidential lection was UDP’s to lose, because an undivided or unified UDP, in simple terms, would be formidable and unbeatable, having got the real or raw numbers, in relation to the demographic make-up of the Gambian population. Simply put, the UDP already carried the support of the largest demographics in the country after National Assembly and local government elections and that was likely to determine the results of the December 2021 presidential election. I said at the time that the ethno-linguistic distribution or composition of the population of The Gambia will play a big role in who would make it to the Gambian presidency. In sum, the winner of the 2021 Presidential election will have largely been determined by these key demographics: women, youths, rural vote, the two must-win jurisdictions of West Coast Region and Kanifing Municipality and the Mandinka majority. Of course, there could have been some overlaps between these demographic groups. For example, a young rural voter could also straddle both the youth vote and the Mandinka majority cohort.

But of course, on my part, I included a clear caveat that UDP will only have or win the Gambian presidency if Ousainu Darboe did not miscalculate, in which case the UDP could lose it. I had warned at the time that various scenarios can play out to frustrate or hamper Darboe’s chances of winning the presidency. Having assessed each one of these possible scenarios, I concluded at the time (and this was in 2018 before Barrow and Darboe came to their parting of ways) that the nightmare scenarios for the UDP was one where you would have a disunited party with both Adama Barrow and Ousainu Darboe running against each other as presidential candidates in the December 2021 presidential election, because potentially, the two men would take natural votes from each other. A breakaway faction of the UDP, led by incumbent President Barrow, was always going to prove to be Ousainu Darboe’s political nemesis.