Why Is President Barrow’s Inauguration On 19th January 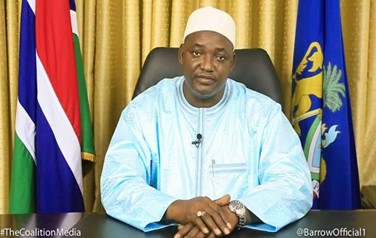 After defeating ex-president Yayah Jammeh in Gambia’s 1st December 2016 presidential election with 43.34% of valid votes cast, President Adama Barrow was inaugurated President of the Republic of The Gambia at the Gambian embassy in neighbouring Senegal on 19th January 2017.

President-elect Adama Barrow had fled to Senegal because out-going president Yayah Jammeh, who had ruled the small West African nation for 22 years, had rejected the result and subsequently refused to leave office.

However, through the intervention of the West Africa regional bloc – Economic Community of West African States (ECOWAS) and other powers, Jammeh was forced to leave the country and go into exile in Equatorial Guinea on 21st January 2017. Jammeh’s departure cleared the way for Barrow to return home and govern as Gambia’s third president. President Barrow returned to The Gambia from Senegal on 26 January 2017.

It is important to note that in diplomacy or international relations, an embassy is the same as the country it represents in another country. So, Gambia’s embassy in Senegal is like Gambia in Senegal. This is the accepted diplomatic protocol across the globe. Therefore, President Barrow’s inauguration in his country’s embassy in Senegal was like being inaugurated in The Gambia.

The rationale of the inauguration on 19th January 2022

The tenure of office of Yayah Jammeh, as President of the Republic of The Gambia, constitutionally ended at midnight on 18th January 2017.

In line with the laws of the land and as a way of preventing an unreasonable vacuum in the nation’s highest office, President-elect Adama Barrow was sworn in as President of the Republic of The Gambia and assumed office on 19th January 2017.

Section 63 of the 1997 Constitution of The Gambia dictates that a President shall serve a term of five years. In that light, the first five-year mandate of President Barrow which was given to him by Gambians in the 1st December 2016 presidential election officially expires at midnight on 18th January 2022.

He will be sworn in on 19th January 2022 to legitimately commence his second term after his landslide victory in the presidential poll of 4th December last year.
Heads of States, diplomats and other dignitaries are expected to jet into the country on or before the said inaugural date to grace the occasion.

After his inauguration, he is expected to form a new cabinet. He is at liberty to either continue with his current cabinet officials, reshuffle them or bring new players either within or outside his National Peoples Party (NPP). The President is empowered and protected by law to hire and fire.

Many Gambians are of the view that the small touristic nation is far much functionally democratic and human rights sensitive now than before. However, there are loud calls for President Barrow to use his second term to usher in a new constitution, formulate and implement viable policies to enhance good governance and sustainable development across the board.