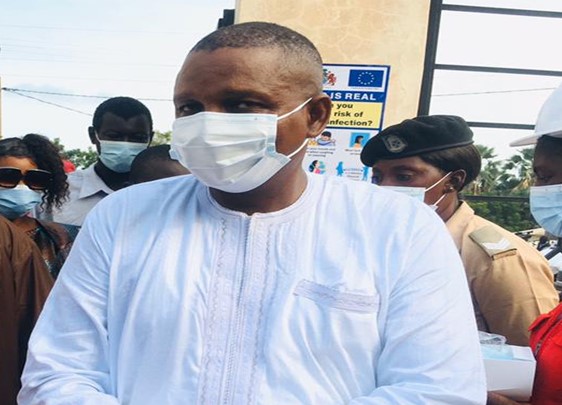 The Gambian-American Presidential Aspirant was answering to questions touching and concerning his dual citizenship status after officially filing his nomination to run for President of The Gambia in the December 4th, 2021 elections.

He noted that his manifesto contains five points necessary to move the country forward. These include citizens orientation, welfare, tax reform and civil service reform and combating corruption

“When we are elected, we will hit the grown running with those policies. We have to set an example our self as leaders, we must have zero tolerance for corruption. It is necessary to put in place strong deterrence to ensure development and progress of the country” Papa Faal said

He further informed the press that he has already declared his assets to the IEC, whilst describing the previous government as tyrannical noting that elections were never credible

“It was a tyrannical government, there was no press freedom, Gambian people tried through elections, but it didn’t work. So, when tyrants are holding on to power, we cannot negotiate,” he said.

Papa Faal was born in 1968 in The Gambia and moved to the United States in 1991, becoming a dual citizen. Faal enlisted in the US Army in 2009 and became a technology specialist, serving a tour of duty in Afghanistan before he was dismissed in 2012.

Faal aided businessman Cherno Njie in plotting the 2014 Gambian coup attempt and purchased M4 assault rifles, which he shipped to The Gambia in 50-gallon barrels. On 30 December 2014, Faal led an attack on the State House in hopes of getting elements of the Gambian Army to join the coup.

However, the Gambian army overwhelmed the rebels with heavy fire, and he returned to the USA. On 1 January 2015, the FBI found semiautomatic rifle training instructions and Google satellite images of the Gambian capital of Banjul in his house, and on 5 January 2014, he was arrested. He faced charges of violating the Neutrality Act of 1794, which prohibited Americans from waging acts of war on other countries.