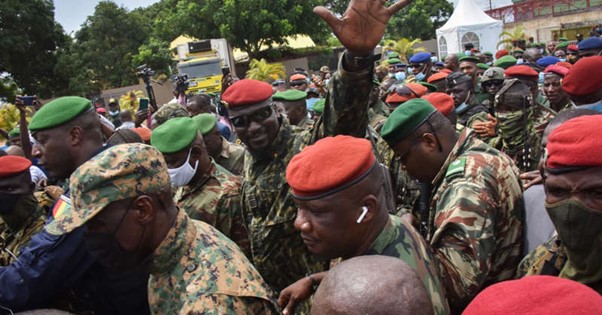 Guinea-Bissau President Umaro Sissoco Embalo survived last week’s five-hour gun attack and the government has launched a major investigation into the foiled effort, which Embalo has denied was carried out by members of the country’s armed forces.

ECOWAS chairman Ghanaian President Nana Akufo-Addo has warned that the August 2020 coup in Mali had produced a “contagious” effect.

An attempted coup was thwarted in the west African coastal nation of Guinea-Bissau last week, the latest in a string of attempted, and in many cases successful, overthrows of governments in the region.

Further east, coups also took place in Chad and Sudan last year, while an attempt to seize the presidential palace in Niger failed.

A study by the University of Kentucky’s Jonathan Powell and Clayton Thyne found that there have been more than 200 attempted coups in Africa since the 1950s, averaging around four per year between 1960 and 2000, before dropping in the first two decades up to 2019.

In 2021, six coups or attempted coups were recorded, prompting UN Secretary-General Antonio Guterres to caution that “military coups are back” whilst lambasting the lack of a unified international response to military interventions.

Guinea-Bissau President Umaro Sissoco Embalo survived last week’s five-hour gun attack and the government has launched a major investigation into the foiled effort, which Umaro has denied was carried out by members of the country’s armed forces.

The 15-nation bloc has suspended Mali, Guinea and Burkina Faso and imposed harsh economic sanctions on Mali and Guinea in an attempt to strong-arm transitional governments into keeping promised timetables for their respective returns to civilian rule.

However, despite efforts to impose punitive measures and deter future overthrows, regional leaders, western allies and international bodies are struggling to contain a groundswell of support for military rule in West Africa.

“And the more coups that occur, the more solidarity among military leaders, likely delaying transition back to democracy.”

ECOWAS has drawn criticism for its imposition of tough sanctions that will disproportionately affect the poorest people in targeted countries rather than the political elite.

Robert Besseling, CEO of specialist political risk firm Pangea-Risk, also noted in a report Tuesday that growing anti-French sentiment in post-colonial countries will “uproot Europe’s counterinsurgency interests in the Sahel and create an opportunity for Russia and Turkey to step into the void.”

“A complete shakeup of West Africa’s political system, international relations, and counterinsurgency strategy is on the cards, and perhaps even an economic shift away from French influence,” he said.

Besseling highlighted that both ECOWAS and the African Union have failed to condemn elected leaders who seek to alter their constitutions to prolong their rule.

“While the trend of coups may indicate a shift in counterinsurgency strategy in the Sahel and across West Africa, the hawkish response to coups, including sanctions, asset freezes, and military interventions, will further entrench opposition to ECOWAS, the AU, and their western allies, most notably France,” Besseling said.

Pangea-Risk suggested that the risk of sanctions to countries deemed susceptible to coups could deter foreign investment and slow economic recoveries.