“We Will Take Actions Recommended By The Commission” President Barrow 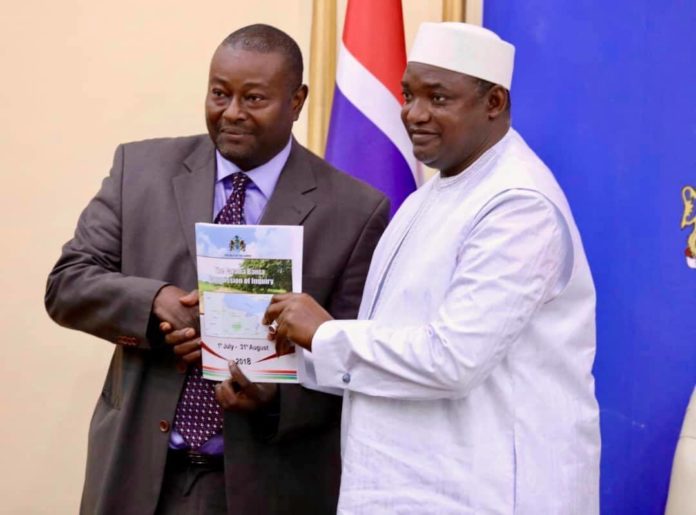 The President of the Republic of The Gambia, Adama Barrow has promised to act on the findings and recommendations made by members of the Faraba Commission.

President Barrow made these remarks after receiving the reports of the Faraba Commission at State House in Banjul. The report contains the findings and recommendations of the incident that resulted to the death of three civilian victims, several injuries and with many properties vandalised.

“My government will review the report to take action on the recommendations made by the commission based on the Constitution without fear or favour, affection or ill–will,” President Barrow said.

Barrow calls on people to turn a new page in the spirit of reconciliation.

Abubacarr Tambadou, Attorney General and Minister of Justice commended the commission members for coming up with such a report within a short period of time.

“Preliminary report indicates catalogue of errors and a lack of consultation between the National Assembly Select Committee on Environment, Police, Geology, the Contractor and the Faraba Community,” Justice Minister Tambadou said.

The Attorney General expresses confidence in the findings of the report, saying it has shed more light on the incident. He added that the president would act on the findings and recommendations of the commission based on the Constitution.

Chairman of Faraba Commission, Emmanuel Joof, a renowned Human Rights Lawyer submitted the report to the President of the republic.

“Our mandate was to investigate the circumstances that led to the standoff, what lead to the death of civilians, who ordered the shooting, who carried out the shootings and who led the destruction of properties,” Chairman Joof said.

A total of 85 witnesses testified including the former and present IGPs, Julakay, Geology officials and Police Operations Commanders amongst others. The commission also visited sites at Faraba, Gunjur and Sanyang.