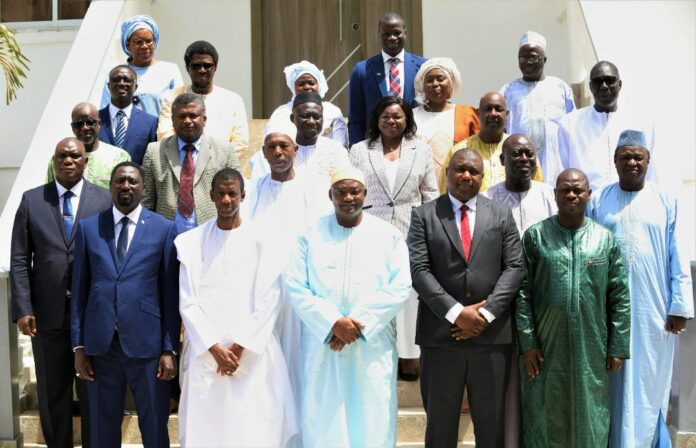 In the swearing ceremony of the new Cabinet members, both the President and Vice President made very good speeches. They condemned corruption and malfeasance and re-echoed the very purpose of public office as they called for strong leadership, responsive policies, performance, and accountability that will impact on the quality of life in the country.

By default, they publicly acknowledged and vindicated the efforts and voices of unrelenting activists, investigative journalists, fact-checkers and vocal citizens! Barrow and Joof have both confirmed that public office is not to seek privileges and self-aggrandizement and vowed that the corrupt state of affairs has to change.

This was the sweetest part delivered by none other than the President himself.

“Your appointments to Cabinet have come at a time when Gambians want Government to be held accountable. This is an era in which the citizens are better informed and politically more active. They now enjoy uncensored freedom of expression, association and participation in national issues, and are determined to fight corruption. As a result, public figures must think, act, and behave differently in the national interest.”

I wish President Adama Barrow had said these words in January 2017 and made sure he took frantic actions to back those words! If he had done so or listened to those conscientious voices of activists, today in 2022 he would not have said these words which are clearly lamenting that corruption, inefficiency, and negligence are the order of the day in his Government, shamefully.

But words are meaningless if they are not backed by actions. I hope the President and Vice will make sure that their words will be matched by the right actions! That’s called integrity!

Integrity is words matching with actions. This is not a western idea, but that integrity as a virtue can be found in our cultures and religions as well as in our families. Integrity is what distinguishes a good person from a villain. Integrity is what makes a person trustworthy, consistent, honest, and dependable.

As we welcome the new Executive team, I have no congratulatory messages for any of them. Rather I remind them of integrity. I remind them that public office is sacred. Public officials carry life and death by the decisions and actions they take. Literally, people live or die depending on the actions of public servants! Therefore, no public official is small, especially if you hold the highest position as President, Vice President, or Minister and so on.

To serve in public office is not a favour. Public officials do not give any charity. Rather the citizens pay them abundantly with incredible privileges, incentives and benefits that serve them a lifetime. Ironically and insultingly, most of the citizens who pay these public officials only receive back poverty, deprivation, high cost of living, unemployment, lack of opportunities with poor, erratic, and expensive services! This is true simply because public officials would neglect their duties, abuse their office, plunder public wealth, underperform and abuse the rights of their citizens. Shamelessly.

Therefore, let us put it to President Adama Barrow and his entire Cabinet that citizens owe them nothing. They owe citizens everything. We should not be kind to them, nor will we undermine them. Rather, we will mercilessly, uncompromisingly, and vigorously hold them accountable. We will scrutinize every word, decision, action and even their appearance! If they don’t like that, so be it! Get out of public office!

The past five years have been a disaster for the country which was presided over by none other than most of the ministers in this Cabinet. If they had performed well between 2017 and 2022, we should not have been in these dire straits. But they failed. No reforms; no system change of any significance. Poverty of the people is as widespread as corruption and inefficiency of public officials from top to down! There is widespread suffering and frustration thanks to the underperformance and recklessness, and negligence of public officials.

The time has come for Barrow to match words with actions! I did not expect any of the ministers in his first Cabinet would be maintained because they failed the country in their first five years. So, if he maintains these same people, one wonders how he will succeed this time around. Therefore, good words are not enough. Let the right actions be taken to show us that he is true to what he says. As citizens, we should record their words to hold against them every day.

On my part, it is neither my job nor do I have any inclinations to congratulate public officials. My job is to check them. So, I want to tell Pres. Adama Barrow and Vice President Alieu Badara Joof let their nice words be backed by real and meaningful actions. Citizens want action to change their lives for the better! Let them show the country that they are men of integrity who are leading a Cabinet with Integrity. Let them prove that they are not fake, corrupt, and hypocritical! Let them show Gambians that they are leaders the people deserve!