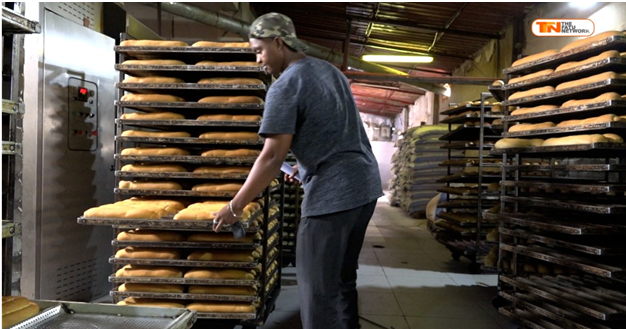 Bakers in the Kanifing Municipality have blamed the increase in the price of bread on the hiking price of flour, causing a price change for a loaf of bread from Ten Dalasis to Twelve Dalasis.

Hanna B.D Sillah, a bakery owner, told The Fatu Network said the increase in the price of bread is due to the high cost of flour.

She also said that the ingredients they use in baking bread have become expensive, saying that they are all factors causing consistent price increase in bread.

“Flour now costs Two Thousand One Hundred Dalasis. We also buy fuel. Per minimum, we use between 6 to 7 liters to bake a bag of flour. In the absence of electricity, I use my generator to bake, and it is very costly.”

Sillah added that the country has a flour factory but however noted that most of the baking products come from Russia.

She noted that the tax importers pay at the port is very high and that such is reflected in the market price of flour and other products.

“I urge the government to enhance price control and also do something about the hike in the price of flour in the Gambia,” she said.

Tamsir Mballow, Manager at Chakraa Bakery in Serekunda said they as bakers have come to an agreement that they should increase the price of bread due to the hiking price of flour in the country.

He said from January to May this year there has been 25% increase in the price of flour. He said they increased the price of bread to Ten Dalasis since January and that they have now increased it to Twelve Dalasis.

He disclosed that they are having challenges with their customers, saying that people are not happy with the new price.

There have been loud calls for government and stakeholders in the baking industry to find a lasting solution to the situation because the survival of many people in the country depends on bread.