US citizens line to head back to US as Ambassador Paschall reveals more than 45,000 Americans have in past couple of weeks been assisted to return home 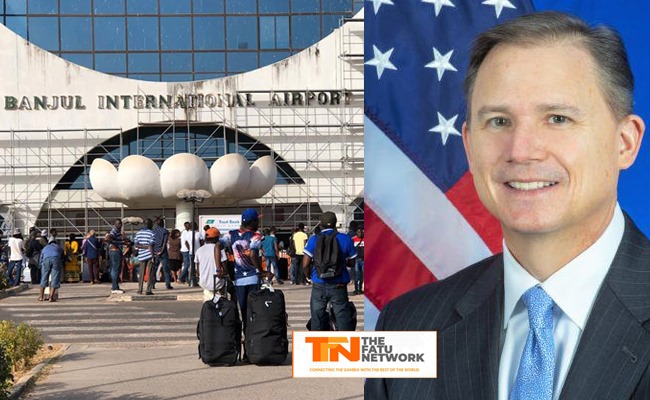 Scores of US citizens and US Lawful Permanent Residents have been gathering at the Banjul International Airport ahead of their planned US-government sponsored repatriation. The ambassador of the United States to The Gambia Richard Carl Paschall III spoke exclusively to The Fatu Network’s editor-in-chief Lamin Njie about the exercise and we began by asking him about what he could tell us about the entire repatriation.

Ambassador Paschall: We have been working for a couple of weeks now with the State Department, I mean as you know, there is an unprecedented effort around to help Americans who are looking for help to get back home.

So for about the last two weeks, we have been working on this project, including messaging to the American community here. That if they are interested in assistance, that they should please let us know. So we have been doing that. So now we have a confirmed list of people who have signed up and they have all been processed and approved and head back. We are very fortunate Ethiopian Airlines agreed to run us a special flight combining evacuees from Conakry, Guinea and Banjul to head back to the East Coast of the United States.

TFN: So this whole evacuation exercise, is it due to the coronavirus crisis?

Ambassador Paschall: This is all related to COVID-19, it’s absolutely coronavirus and [there’s] an unprecedented effort globally. The State Department has helped more than 45,000 Americans return from around the world in the last couple of weeks, something that has really never before been done.

TFN: So in The Gambia, how many people have been listed and scheduled to be repatriated?

Ambassador Paschall: We had interest from a couple of hundreds. We already had processed people who expressed interest and we are optimistic that… Assuming the flight comes in because it was delayed a little bit today by the airline departing from Addis Ababa on the way to Conakry but we are pretty confident we would be able to get everybody onboard that is already registered and signed up.

I would say we are very very grateful to the Gambia government for the tremendous assistance that they given us organising this flight and making sure that everything goes smoothly at the airport today.

TFN: But then what happens if somebody ended up not getting in the flight?

Ambassador Paschall: We tried to send a message a few weeks ago that anybody who was travelling overseas, we issued a Level 4 travel advisory several weeks ago that said anybody who was travelling should try and return to the United States on commercial aircraft. We of course echoed that message here, there was a central message broadcast globally and our message has been for some time that people need to prepare to hunker down and follow the directions of the government of The Gambia in terms of self-isolation and avoiding contact with others to limit the spread of the virus.

TFN: Let’s talk about the cost of the flight, your website indicates $1,900 and some people are saying that it’s expensive. What do you have to say about this?

Ambassador Paschall: US law directs that we have to charge with the lowest one-way coach fare and economy fare was between Banjul and in this case Washingston DC, prior to the crisis beginning. So that’s what the price will be fixed at and that’s what will be charged. Now it’s important to emphasise that those people who have signed up and confirmed that they wanna go, we don’t collect money from them. I am not sure what the total chartered flight is costing the United States government. I know that quite frankly because we are limited by law and charging only what it would have cost for the person to take a commercial airline prior to the crisis. I have been involved in a few evacuations before. Historically, the United States government is out of the pocket. The payments from the people don’t typically add up to the cost to charter the aircraft. But we do not collect money, we are not accepting credit card at the airport, we don’t force them to pay cash. We simply ask them to commit to repaying the funds to the United States government. So they do sign what is called a promissory note, a specific form that commits them to repaying that but again just to make it clear, we were not requiring payments in advance, we just needed a commitment from the people repay the cost of that flight once they get settled back home.

TFN: We understand this flight is flying directly to Washington DC. What happens if they get to Washington, would they be on their own now or do you have a way of ensuring they get to their respective states and cities?

Ambassador Paschall: We get to them Washington and from there they are on their own. The flight will land [and] that means that… We do know that it has been difficult given the changes in the flight schedule, we’ve had several changes due to the challenges of scheduling some thing like this but it does mean that people are on their own once they land in Washington but at least we get them back to the United States and then there are commercial flights that are operating in the United States for those that need to fly elsewhere and of course they are many people who are from [within] a drive. And some people who are going on the flight have relatives that are going to meet them at the airport etc.

TFN: There have been some comments these people are safer in Gambia than in United States were coronavirus is tearing through some of your states. What do you make of that?

Ambassador Paschall: I am staying here. This is my home right now. I and many members of my embassy team are staying here. I think it’s important for everybody to follow the guidelines that we have been giving and of course you all know the ministry of health’s guidelines, the government of the Gambia’s guidelines which is consistent with the World Health Organisation and consistent with the United States Centres for Disease Control and Prevention. We are all saying the same thing: self-isolate, be aware that if you’re higher risk of complications from coronavirus that you take extra precaution etc, or if you know who are more at risk, please take precautions not to inadvertently bring disease back to them. So everybody just needs to follow that guidelines and try to be as safe as possible and obviously of course wash hands. Everybody wash [your] hands, cover your coughs, wear face masks if you can just to prevent inadvertent coughs. This is a really tragic disease that is taking a lot of lives in the world. And of course, all the countries, we are learning more every day about this disease and about how it impact people. So the most important thing is wherever you’re comfortable and we are trying to return people who want to return to the United States and that’s what we could do.

TFN: Your country places a lot of premium on her citizen. But what happens if a citizen or a lawful permanent resident deliberately decides to stay in Gambia – will there be a similar package to evacuate them when they too want to leave?

Ambassador Paschall: This is the flight. I don’t expect there will be any more. All of those people who have signed up and commit to the conditions of the flight, we plan on getting them on that flight today and the rest of us here, we will follow the government’s directions and isolate and try to limit the impact of the disease

TFN: Anything else you want to say?

Ambassador Paschall: I want to emphasise that the United States stands shoulder to shoulder with the Gambian people and the Gambian government as we all work together in trying to address this. The United States is the single largest funder for World Health Organisation, frankly for all of the UN agencies we pretty much fund the significant part of their budget and of course we are working very closely with the government and WHO here on the ground to make sure that resources through WHO are delivered. Over the last 20 years we spent over a 100 billion dollars to support the construction of strong public health systems across Africa, just in Africa and we are very proud of that record and we will continue to support African countries and their fight against this virus.