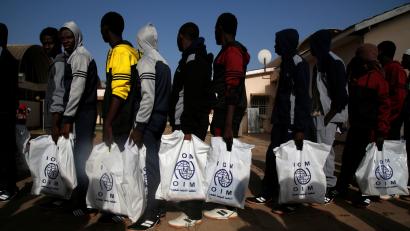 Journalists were on Monday denied access to the airport as a new batch of Gambian migrants arrived in the country from Germany.

At least 15 Gambians were on Monday deported from Germany amid unprecedented scenes.

They were repatriated one month after over a dozen Gambians were deported from the same country.

Journalists on Monday attempted to access the airport as the deportees arrived but were denied access by airport security officers.

One airport security officer was caught on camera saying journalists were not allowed to access the airport.

Gambian Talents Promotion reported that Gambia immigration and other government officials said they had no information for journalists.

The online news media also reported that journalists were asked to leave the airport premises by security officers because ‘they should not be there.’