Unpermitted Protest Goes Ahead Despite Heavy Security Presence In Banjul 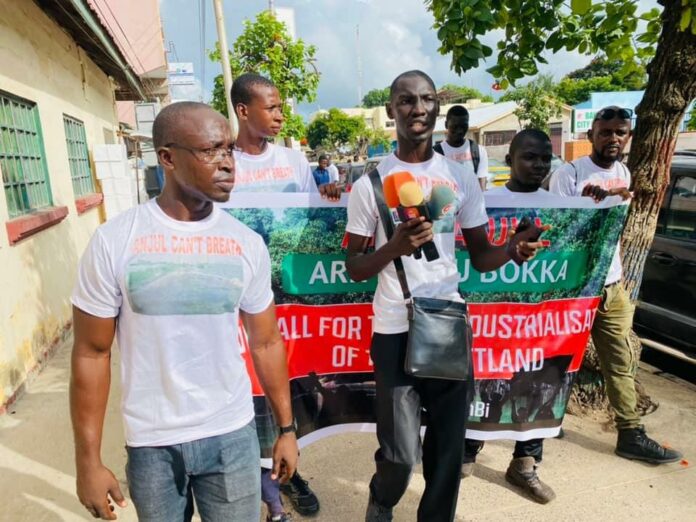 As residents of Banjul want to ensure the safety of more than 31,000 inhabitants and build a community which is safe a place to live, a group of young people who go by the name ‘The Arr Banjul Movement’ together with some environmental activists organised Monday, June 22nd what they called an awareness-raising to “DE-INDUSTRIALISE’ THE TANBI WETLAND IN BANJUL.”

According to Ousainou Colley, commonly known as Ousainou Gambia, “The Tanbi Wetland was the main source for the water to go to the wetland, but this has all been interrupted as a result of the activities happening in the area. This is because some business people corrupted the authorities for their own capital gains,” he claimed.

He stated that the purpose of the march-past was for preserving the island to protect them from further sea rises and inundation. Also to restore Tanbi wetland in order for it to continue to be an attractive area for birds and a breeding ground for fishes and to preserve the livelihood of those who rely on it for their daily survival.

The police, however, on Sunday evening issued a statement urging people not to partake in yesterday’s march-past, claiming that Arr Banjul Movement was not issued any police permit to hold the march-past.

However, despite this warning, the Arr Banjul Movement still when ahead with their protest, but with less than 20 people.

Ousainou Gambia emphasised that the protest was necessary amid issues affecting the lives and livelihoods of Banjulians.

Colley added: “Our movement is apolitical and our message is to sensitise people about what is happening in Banjul. We are not going out to cause problems. We are the voice of the people, hence we are speaking on behalf of Banjulians,” he said.

The fight to save the country’s capital city, he said, starts today.

“Lots of people want to turn out in numbers and join the protest. However, the police press release which was issued on Sunday evening discouraged a lot of people from participating. I want the authorities to know that we will keep up with this momentum with the objective of ensuring that we save Banjul. This is the capital we have and the environment of Banjul is threatened. Therefore, we can’t sit and allow that to continue.”

The much-talked-about Banjul Road and Rehabilitation Project, he said, was not done the way it was supposed to be done despite the injection of millions of dollars into the project.

“This has all contributed to the flooding in Banjul. The sad thing is that some people were packed in schools, while the authorities were sleeping in their comfortable houses. These homeless people could have been taken to a hotel rather than sleeping at schools. Therefore, to us, they don’t care and that’s among the reasons why we mobilise ourselves and protest.”

Meanwhile, riot police were seen within all the strategic locations of the capital city, while other personnel of the Police Intervention Unit (PIU) were stationed at Bund Road where the protest was supposed to begin.

The protesters later gathered at Arch 22, but they were later dispersed and the group leader was later invited to the Police Headquarters in Banjul for further discussion.