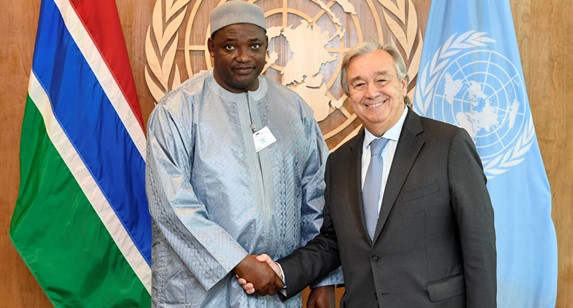 The United Nations Peacebuilding Fund (PBF) is a multi-year standing trust fund for post-conflict peacebuilding, established in 2006 by the UN Secretary General at the request of the UN General Assembly.

In Gambia the fund has invested a total of US $26 million in the past five years, funding 13 projects.

The fund was established out of the recognition that among the impediments to successful peacebuilding is the scarcity of resources, most notably financial resources. The fund aims therefore to extend critical support during the early stages of a peace process.

Speaking at Tamala Beach Resort during a two-day review and coordination workshop organised by the UN Peacebuilding Fund in collaboration with the Office of the President, Noah Touray, Secretary General and head of Civil Service revealed that the fund has supported the transformation of the former Policy Analysis Unit (PAU) into the Department of Strategic Policy and Delivery (DSPD) under the Office of the President.

The theme for the workshop was ‘Learning Together to Harmonize Peacebuilding Initiatives for Better Results’.

“We have so far registered commendable progress in sustaining peace, particularly in the areas of transitional justice, constitutional review, security, judicial reform, women and youth empowerment and participation and in the integration of returning migrants,” Noah Touray said.

He registered his appreciation to the Fund for the assistance rendered and applauded the UN agencies for their technical support.

Ms. Seraphine Wakana is the country’s UN Resident Coordinator, she noted that since the democratic transition in 2017 the UN Peacebuilding Fund was one of the first respondents to support the government in its aspirations towards democratic reforms and transitional justice,” she pointed out.

“This is part of the global UN support to the government and people of The Gambia as it continues to strengthen democracy in the work after years of autocratic rule,” Ms. Seraphine Wakana said.

She encouraged those implementing the various projects to ensure visibility of the positive results of the initiatives so as to attract interest and mobilise more support from other donors to sustain the peace and stability of the country.