Tribute to Ambassador Paschall, An Outstanding Diplomat with Deep and Genuine Love for The Gambia 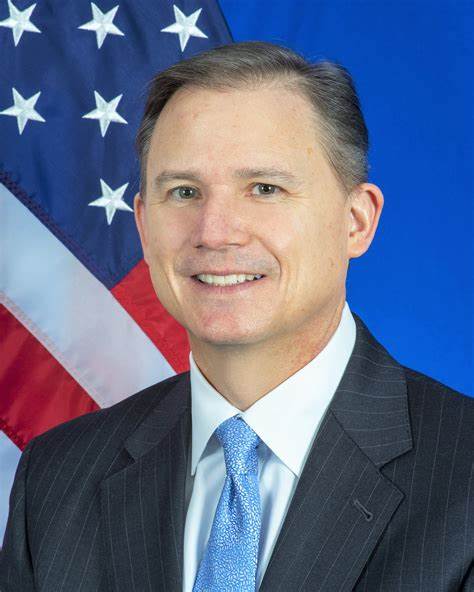 Ambassador Carl Paschall II arrived in The Gambia in March 2019, taking over the baton from Ambassador Pat Alsup, an equally amazing Ambassador who oversaw the first two years of the transition from dictatorship to democracy. At her departure, Alsup had worked on the building blocks for a transformative relationship between Banjul and Washington, but much of the work were still at their infancy stage, requiring a great deal of continued innovative and stronger leadership to move the needle through.

At the birth of the change in 2016, relations between The Gambia and United States were at all-time low. For years, Jammeh’s autocratic leadership, bad governance, and worst human rights record, had almost collapsed what remained of the ties between Washington and Banjul. The portfolio of bilateral programs between the two nations was too small compared to countries like China and others. While there were a few U.S. large interventions through third party organizations, direct assistance from the United States Embassy were through small grants such as Ambassador’s Self-Help Fund, Public Diplomacy funds, and Democracy and Human Rights Fund; funds designed to support smaller community-driven and civil society-focused projects.

Other direct supports focused on building the technical capacity and competencies of Gambians and her institutions. For example, through several exchange programs, the embassy offered opportunities in the US for Gambian youth and mid-level professionals through Mandela Washington Fellowship, Study of the U.S. Institutes, Pan-African Youth Leadership Program, International Visitor’s Leadership Program, and Humphrey Fellowship. These programs have Gambians attend some of the best universities in the U.S. for short-term institute programs. Additionally, U.S. technical assistance through the Fulbright program brought professors to promote curriculum development at The University of The Gambia.

While these programs were helping the country build its human resource cadre, major funding United States institutions like the United States Agency for International Development (USAID) and Millennium Challenge Corporation (MCC) had no direct presence in The Gambia. Although USAID-Dakar funded cross-country projects like the Cashew Chain Value Project, there was no direct support to The Gambia Government under Jammeh. It was inconceivable for the U.S. to offer Gambia such projects given the country’s decayed human rights records. The United States’ assistance is tied to a country meeting certain benchmark, for example, making advancements in its annual Human Rights Report, Trafficking in Person (TIP) Report, and Fiscal Transparency Report.

The ties between the two nations were further deteriorated by Jammeh’s paranoia and ghost suspicions of “America’s efforts to undermine” his rule, especially after the events of December 30th, 2014, when he pointed fingers at “certain major powers behind” the botch attempt to end his decades of carnage and misrule.

Without digressing from the reasons for this tribute, the context is meant to offer understanding of the status quo at the time and the amount of worked needed to transform the ties between the two nations in a democracy.

Coming back to Ambassador Paschall, his smart, innovative, excellent communication, culturally sensitive, and negotiation skills breathed a new life into the relationship between Banjul and Washington. Even as he took over, The Gambia, despite the new democracy, was still a long way to meeting certain right and governance benchmarks of America. And with the tools, machinery, and lubricants of a dictatorial system intact, Ambassador Paschall had a huge task before him. The Ambassador was so ambitious to make a significant inroad in our ties, but he knew the new government must translate political will into tangible reforms that will improve the country’s scorecard. Paschall’s kind but bold diplomatic style, backed by a willing and committed embassy team, enabled him to make significant inroads. As I wrote this tribute, the National Assembly last week ratified a $25 million United States grant to support the country’s power and energy sector. That grant came through the MCC, which now has a direct base in The Gambia, headed by a director and support staff. Should the country continue to augment its democracy and governance scorecard, there is no limit as to what the MCC or the USAID could do for it.

On his other traits, Paschall is an inspiring leader. Throughout my entire career, I have never worked with a more professional and inspiring leader like him. Ambassador also has a deep sense of compassion, strengthened by his sheer humility and sensitivity. The three years that we worked together; I saw this diplomat come down to the level of the last rank in line. He was the most approachable diplomat, a good listener who respected the concerns and viewpoints of his staff.

One of the most inspiring accomplishments of the Ambassador within the embassy community was the elimination of a deep-seated suspicion between American and Gambian staff. At the time of his takeover, relations between Americans and their Gambian colleagues were marked by “Us versus Them” atmosphere. No sooner had the Ambassador arrived than this ugly situation ceased to exist. The Ambassador promoted tolerance, mutual respect, equal opportunity, and professionalism among his staff. Leading by example, he oriented his staff to this new culture. As I left the embassy last year, the collegiality among the staff was exceptional with productivity outstanding. It takes great leadership to manage this kind of relationship.

The Ambassador was equally empowering. He made sure every member of his staff was allowed to do his or her job to the best of their ability. Because of such empowering nature, Ambassador hardly rejected a press engagement proposal from my supervisor and I. I also remember how he empowered the locally employed staff association to lead the development of an embassy-wide ethos statement as a corollary to the U.S. Department of State. He could have asked the American staff to lead on this, but he wanted to ensure the local staff influence this statement.

Throughout the two and half years we worked together, I had accompanied the Ambassador on several regional trips and other official functions. Each of those visits saw the Ambassador immersed himself deep within the local communities as he interacted freely and openly with community leaders, youth, ordinary villagers, volunteers, and local authorities.

My personal interactions with the Ambassador were gratifying, and each presented an opportunity to be inspired and challenge my own career ambitions. My most memorable moment with the Ambassador was when on a Friday evening in October 2020, he placed a call, informing me that I was the Africa Bureau’s Finalist for the U.S. State Department’s Global Employee of The Year Award (I was among six finalists each representing a region). And it wasn’t only me, the Ambassador had conveyed personal courtesies to his staff on numerous occasions, good or bad.

I can’t conclude this tribute without mentioning a few lines about the Ambassador’s deep and genuine love for The Gambia. If he had his way, he would have opted to extend another term in The Gambia. The Ambassador is a proud lover of The Smiling Coast, appreciating our rich cultural tapestry, local delicacies, socio-cultural interactions and relationships, and the local treasures and heritage. Paschall might have just wrapped up his tour, but his love for the country is ingrained in his heart, which he will take along.

Wishing you the best, Ambassador.

Disclaimer: This piece has not been influenced nor supported by any member of the current embassy staff. This is a personal tribute as an ex-staff, showing gratitude and appreciation to a diplomat who wraps up his tour with indelible marks on The Gambia-U.S. ties.

Hatab Fadera worked at the U.S. Embassy Banjul from 2015-2021, first as Cultural Affairs Assistance, and as Strategic Content and Media Coordinator. He is currently doing his Master’s in Emerging Media Design and Development at Ball State University in the U.S.