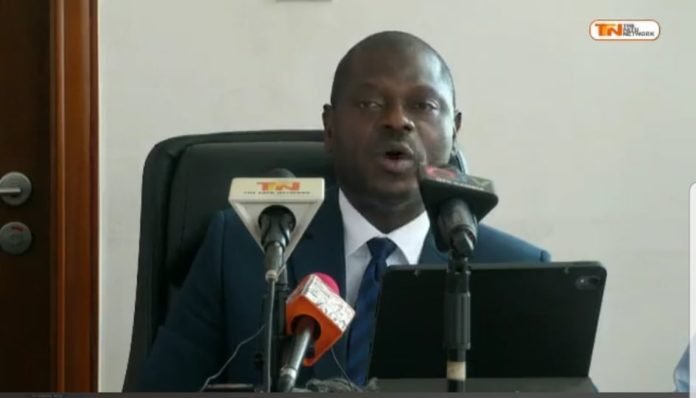 The Minister of Trade Seedy Keita told reporters on Wednesday two Gampetroleum bosses, the general manager and operation chief, are helping police in their investigation of the recent fuel shortage in the country.

The two officials are Saihou Drammeh and Lamin Gassama.

Below is the trade minister’s statement in full, as transcribed;

During the week of week ending 31st of October 2021, the country witnessed shortage of gasoil at majority of the gas stations across the country. In contrast to the reports received from Gampetroleum for that week, dated 25th of October 2021 indicating the stock balance of 6,711,514 metric tons which would have lasted eight days for the national demand. This prompted a stock verification visit on the 31st of October to the depot comprising the state security, PURA, ministry of trade, Major Oil Marketing Companies and the management of the depot mainly the general manager and the operations manager. It was found that tanks D1 to D4 were all empty while tank D5 contained 50,000 litres of mixed diesel and water. The total capacity for the five tanks is 20,000 metric tons.

The timing of the stock-out could not have come at a worse time and it resulted in adverse economic and social impact nationwide. This prompted His Excellency the President Adama Barrow to establish a multi-sector taskforce comprising PURA, Gampetroleum board, ministry of trade, ministry of petroleum and security services on the 1st of November to review the matter and recommend courses of action to redress the matter in its entirety. The taskforce began work immediately with the major oil marketing companies namely OMCs, to find solutions to restore supply in order to ensure fuel availability. This involved the lifting of fuel from Senegal to The Gambia over land in order to address the fuel shortage. In this regard, we extend our gratitude to the presidents of the two countries and the customs authorities thereof, who assisted in expeditiously dispatching the oil tankers. This stop-gap measure reduced the shortage a bit while the GNPC through the support of the petroleum ministry worked hard to place order that will meet national demand for the short to the medium term.

The team commenced investigations to determine the cause of the shortage. This took the form of discussions to the Gampetroleum management, PURA management and the relevant stakeholders. Gampetroleum management have not provided any credible documentary evidence to explain the shortage and as a result this prompted a visit to the depot. In order to review the information in their IT systems and understand better the situation, it was found that the software acquired to manage the depot operation is not being used and rather the depot operations were maintained on excel file. Also, management did not have a single account for each trader or OMC but transactions were maintained in excel sheets according to vessels that delivered the fuel stock. The hard copy of the transaction files were locked in the General Manager’s office. This prompted the taskforce to use circularization, which is to write to the OMCs and traders to request their details of transactions with the Gampetroleum depot. There were three major international oil traders namely [Trafilgura, BSTV and Addax] whose stock were held at the depot as a bonded warehouse and responses were received from eight OMCs namely Castle, Petrogaz, Speed, Jah Oil, NP, AfriOIl, GNPC and GACH. The compilations of the responses received indicated that 9,643 metric tons BMS or otherwise called petrol, 16,543 metric tons of diesel, 3,445 metric tons of jet fuel, 17,793 metric tons of HF4 belongs to international traders and 1,111 metric tons of BMS, 3,711 metric tons of diesel and 684 metric tons of jet fuel belongs to the local OMCs. After accounting for the closing stock, 9,843 metric tons of petrol, 20,246 metric tons of diesel, 17,793 metric tons of F4 belongs to the traders and the local OMCs’ net. As can be seen, the majority of the stock belongs to the international traders. Two OMCs have negative balances. It that it is meant, they took stock from the depot that does not belong to them, of 2, 016 metric tons of petrol, 5,249 tons of diesel. These are the OMCs that responded to the circularization request.

International traders were concerned about the disappearance of their stock and a number of them flew from Europe to meet the taskforce. These has big economic implications for the country, as failure to settle them will have negative economic impact. Gampetroleum and the taskforce assured them that they will be paid their stock and the conditions to fulfill this are being discussed. Following the initial assessment, it was discovered that more than half of the fuel stock that should have been at the depot could not be accounted for. This prompted an official investigation into the matter which is ongoing. The focus of the ongoing investigation by the security forces is to determine to whom and under what condition the missing stocks were allocated. Since this whole saga began, the taskforce has discovered some questionable management practices which have given rise to a need for a further review of the standard operating procedures of the depot.

Gampetroleum is a private limited liability company but the government will ensure that the needed guarantees for the traders are met by the Gampetroleum so that confidence can be restored for the oil supplies by these traders to resume. The Gampetroleum board has taken the needed steps including reporting the matter to the police for the needed actions to be taken to account for the unaccounted or missing stock. As it is, that is as we speak, the general manager of Gampetroleum and the operations manager are helping the police in their investigation and the government of The Gambia keenly awaits the outcome of the investigation and assure the general public that needed actions will be taken according to law. The public is hereby assured that all measures will be taken to ensure smooth and uninterrupted supply of petroleum products.