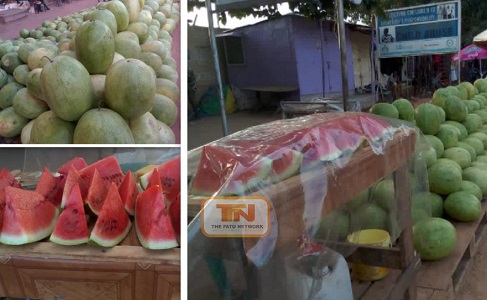 Watermelon farmers, who transport their produce to the greater Banjul areas to sell, have called for a market space to be built for them as their produce is exposed to post-harvest loss. They stated that their only alternative way is to scatter watermelons on strategic roadsides.

Speaking to The Fatu Network, Alhagie Babou Gaye, a farmer from Jakadou lamented that he suffered a huge post-harvest loss as a result of a lack of proper market space.

“My produce is on the roadside along Kairaba Avenue. A motor vehicle while trying to drop off a passenger, incidentally, stepped on my watermelons and a lot perished. I have no choice because I am selling at the wrong spot. Farmers’ Platform needs to advocate for us,” Mr Gaye pointed out.

This medium visited several watermelon vendors, and they told us they are farmers who transport their produce themselves from the rural area to sell in the greater Banjul areas.

“I come from Brikamaba, I am here with 2 of my children to help me sell watermelon. I lobby for this space at Latrikunda on the roadside. Unfortunately, people steal them, and bicycles also trampled on them,” Bambalai Bah explained.

In Bakoteh, some farmers were seen offloading watermelons from a truck on the roadside. Bakary Sanneh asserted that the Farmers Platform needs to take up the issues of an organised market for watermelon farmers with a facility to preserve them to avoid post-harvest loss.

“I lost more than 30 watermelons due to drivers mistakenly destroying them. People should understand our plight because this is perishable produce and care must be given in handling them,” Cherno Jobe said.

When contacted for his reaction, the secretary general of the Farmers Platform, the Gambia Mr Lamin S Fadera highlighted that Government since the early 90s has not devised any mechanism to generate industries that will process melon to add value to the product for both domestic and foreign markets. The sector is left completely loose despite its economic importance.

“Farmers also failed to diversify melon production. They all cultivate and harvest at the same time and congest the market with their produce. This results in serious post-harvest losses. We are calling on the ministries of agriculture, trade, industry and employment to immediately look into the improvement of the watermelon production value chain,” Mr Fadera said.

Mr Fadera admitted that there is no organised market outlet for melon farmers, they can be seen littering around roadsides and street corners and both local councils and municipal councils are not doing much to address the problem.

With regards to providing a specially designated area for watermelon vendors, Mr Wurra Bah, the deputy director of administration at the Kanifing Municipal Council (KMC) said the council faces constraints in terms of open space but the demand is subject to discussion.

“It’s a genuine appeal but it has to be discussed at the council level. We have not been thinking about it. The specially designated area was given to ram sellers during the tobaski feast and the same could happen. Melon sellers litter everywhere, and cleansing is a burden,” Mr Bah stated.