“This is the Final Battle of Ideas”- Halifa Sallah 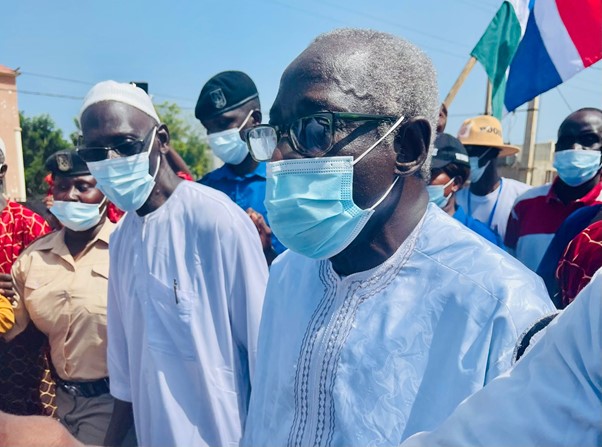 Gambia’s veteran politician Halifa Sallah of the People’s Democratic Organisation for Independence and Socialism (PDOIS) has graced Election House to submit his nomination papers to the Independent Electoral Commission (IEC).

Hon Sallah was accompanied by an organised crowd of supporters who walked from the police barricade to the IEC building, unlike other prospective presidential candidates who drove in.

According to Hon. Sallah he has reached the pinnacle of his participation in politics in the country, therefore, he will help the next generation position themselves for development.

“This is my last attempt; I have played my part.  Now the Gambian people have a voice and power, we now have our own will,” Halifa Sallah said.

He went on to note that his party seeks system change, noting that only the wealth of the nation can eradicate poverty,

“The nation is a national ‘osusu’ [saving scheme], the national banks should give loans without interests. No politicians pocket can eradicate poverty,” he said.

Hon Sallah revealed that only his party has articulated a plan for the eradication of rural poverty and that is key to the development of the nation.

“No other party has articulated its plans for the eradication of rural poverty, but we have done that. Let us use the national wealth to eradicate poverty,” he said.

He emphasised that a major method of achieving this is ensuring that the village fund that comes in the form of rates or taxes go into the village treasury and not the councils.

Halifa Sallah was born in 1953 and raised in Serekunda, The Gambia. He was educated in the United States where he graduated with a degree in sociology.

He returned to the Gambia in 1977 and worked as a social worker in the Social Welfare Department.

Hon Sallah is currently a member of the National Assembly representing Serekunda.