‘They are only here during politics’: BAC chairman aspirant derides Yanks and Gitteh 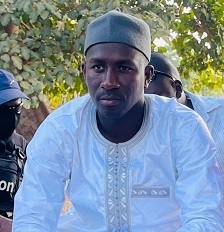 Ibrahim JS Sanneh, an aspiring independent candidate for the Brikama Area Council chairmanship in May said his potential opponents, Yankuba Darboe and Ahmad Gitteh, are disconnected from the realities on the ground, noting that the duo only come to the Gambia during seasons of politics.

The 30-year-old, determined to go solo without any political party’s backing, told The Fatu Network that the duo is not more competent than him. He said that he is living in the country and knows all the problems that the people of the region are facing.

“I know the concerns. I was born and raised in these challenges. These two are all travellers, both residing abroad. They are only here during politics and when that is done, they are gone. You don’t see them again,” he uttered.

Yankuba Darboe has been picked by the main opposition party, United Democratic Party, as the party’s candidate for the position of chairman in the local government elections for Brikama. Ahmed Gitteh on the hand said he will also contest. It is not yet clear if he will be picked by the ruling National People’s Party (NPP) or will go as an independent.

To Mr. Sanneh, living with the people of the West Coast Region for most of his life makes him a more suited candidate to solve the region’s problems than Yankuba Darboe and Ahmad Gitteh.

“If you ask them (Yankuba and Ahmad) how much the prices of some vegetables in the market are, they cannot tell you because they are not living here. Even the price of sorrel or bitter tomatoes in the market, they can’t tell. For me, I know everything about our markets,” he told this medium.

He added that people on the West Coast streets will not even recognize Yankuba Darboe and Ahmad Gitteh, saying they can only be recognized on social media.

Why Contest as an Independent Candidate?

According to Ibrahim, he is contesting as an independent candidate for the forthcoming Brikama Area Council local government election for chairmanship because the region has been politically divided. He said the region cannot afford anything meaningful when they remain divided based on political ideologies.

“I want to contest under the independent ticket to bring unity and equity for the development. Looking at the political situation in the West Coast Region, our people are divided through party lines. We all know that we can’t continue like that. It will only take us backwards, and we cannot archive any meaningful development.”

He added that being an independent candidate, considering the disconnection of the duo from the people on the ground as well as being divided politically, he will have support from both UDP and NPP.