‘The Tasks Ahead Are Many, Complicated and Difficult’-Barrow Acknowledges; But Reaffirms His Commitment to Tackle Them 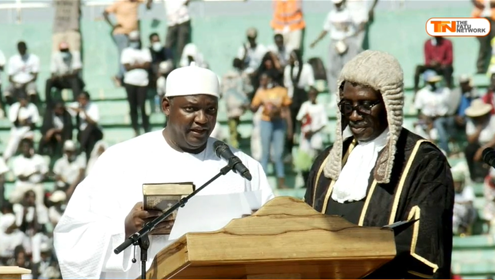 President Adama Barrow has used his first speech as Gambia’s new president to acknowledge that the tasks ahead are many, complicated, and difficult to tackle but reaffirmed his commitment to deliver for the people of Gambia.

This the president said will be done through the harnessing of resources and building of national knowledge and technology capabilities. This is expected to ultimately energise the country’s development effort.

“Based on first-hand experience, I am fully aware that the tasks that lie ahead are many, complicated, and difficult to tackle. Each of our sectors has huge gaps to fill. We will harness our resources, build our knowledge and technology capabilities with the relevant skills and competencies to energise our development efforts,” President Barrow said.

He further revealed that he strongly believes that with better quality education, institutions will impact the lives of the citizens more significantly, address the technology requirements for the agriculture sector and be more impactful in the fight to eradicate the poverty levels across the country.

Working together President Barrow says can foster understanding and attain national development goals in the mutual interest of the people.

“I am convinced that there is nothing a people cannot attain if they unite and have a common will to succeed. The potential that lies in our human resource is massive and offers a source of optimism, courage and determination to succeed,” the president said.

He used the opportunity to pledge his commitment to putting more emphasis on uplifting the status of all Gambians, especially the under-privileged and vulnerable Gambians in underserved communities. Whilst promising that under his administration development will be distributed within all the regions of the country.

The president climaxed by making a rallying call for collective, decisive and positive participation of all Gambians, irrespective of ethnic or political affiliation, gender, or religion.