The Pros and Cons Of The Presidential Elections 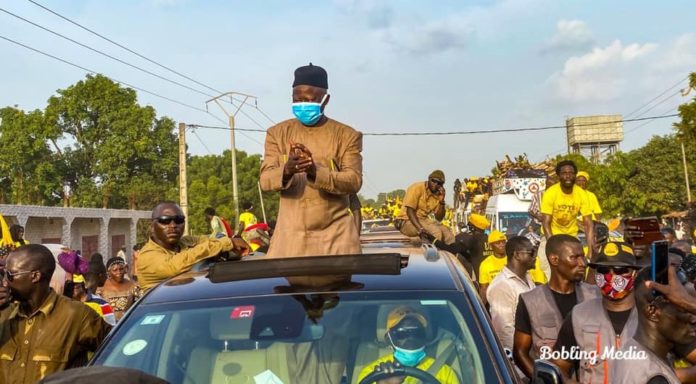 The hottest political topic in this country today is the petition by the United Democratic Party (UDP) to the Supreme Court against the election of President-elect Adama Barrow, claiming some electoral malpractices and calling for the annulment of the results.

It is quite a tall order indeed, especially considering the margin of Barrow’s victory. However, the UDP and any other participant in the elections has the constitutional right to challenge the results or any aspect of the elections. Therefore, the onus is now on the Supreme Court to determine whether or not the UDP has a prima facie case against President-elect Barrow and the Independent Electoral Commission (IEC), respondents to the petition.

While everyone is anxiously waiting for the outcome of the court case, most people are also trying to come to terms with the results of the elections, wondering how Adama Barrow managed to get such a landslide victory against his most bitter rival, Ousainou Darboe. It appears that even many supporters of the National People’s Party (NPP) never foresaw such a huge margin of victory, hence their muted celebrations.

Even though there were five candidates who lost against Barrow, but the biggest losers were the UDP and their presidential candidate, Ousainou Darboe. No doubt most UDP supporters were quite devastated by the results because most of them were quite confident of victory. Therefore, for not only losing but Darboe scoring less than half of what Barrow scored, came as a big shock and disappointment for them. Most of them are no doubt still wondering what may have gone wrong with their campaign strategy.

Where has the UDP strategy faltered, one may wonder. UDP is a well-structured party which was expected to perform much better in the elections. However, the very fact that they performed well below everyone’s expectations shows that something was fundamentally wrong with their approach to the elections.

One of the most effective strategies by the NPP was the successful dis-information campaign they mounted against the UDP, portraying the party as a tribal clique inclined towards the Mandinkas and hostile to the other ethnic groups. Of course, like many other political groups in this country, the UDP had among their midst some ethno-centric bigots who were making disparaging comments against non-Gambians and other ethnic groups. However, such extremist elements were also found in almost all the other parties, including the NPP.  But, the NPP strategists made a lot of capital out of those ethno-centric allegations against the UDP and to a very large extent, succeeded in making such allegations against the UDP stick and eventually convinced many non-Mandinkas that the UDP were against them and they would suffer a lot of discrimination under a UDP government. Eventually, the NPP succeeded in scaring away many non-Mandinkas from voting for the UDP.

However, as election is a process, one needs to look at every stage of the process in order to conclude its freeness and fairness. Of course, most people are making some reference to the fact that most of the election observers have concluded that the election was free and fair. But, the observers can only attest to what they witnessed and that was the very tail end of the process, which was the casting of ballots. The question is what had happened during the other processes; were they all free and fair? That is the crux of the UDP petition, most of which was out of the purview of the election observers.

It is alleged that many people who were not qualified to vote in this country got registered, which was said to be part of the NPP strategy. However, the UDP and the other political parties were given the opportunity to go to the revising courts to challenge some of those anomalies of the voter registration process, but none of them took the opportunity. Therefore, it seems too late now for the UDP or any other individual or group to challenge that aspect of the electoral process.

Another school of thought is however that the UDP were victims of their own complacency and some poor judgments of the party leadership, particularly the party leader, Ousainou Darboe. It is quite obvious that he played a big role in the disintegration of Coalition 2016, which succeeded in toppling the dictatorial regime of former President Yahya Jammeh. Darboe was accused of being one of those who contributed to the disintegration of the Coalition when during the run-up to the National Assembly elections in 2018, he vehemently opposed the suggestion to contest the elections as a coalition but he instead insisted on the different component parties going it on their own, which was the death-knell of the Coalition. That was the very beginning of the disintegration of the Coalition.

Darboe also made so many complimentary decisions in favour of President Barrow, not only threatening to take to court anyone who challenged Barrow’s intention to serve five years instead of the three years that he had agreed with his coalition partners, but he also described Barrow as Moses who came to liberate the Gambia, which comments later came to haunt him. We had seen how he had later tried to contradict some of those comments he made about Barrow, including calling on him (Barrow) to serve three years instead of the five that he had been defending, which change of position seems to have put him (Darboe) in a very bad light, with some people describing him as an expert on ‘wah-wahet’ (changing his tone according to circumstances).

One other area that the UDP seems to have shot themselves on the foot, particularly during the election campaign was the decision (albeit not official policy) to boycott some media houses simply because they accused them of being supporters of the NPP. Those media houses included Fatu Network, QTV and Star TV, which many political analysts saw as a great mistake on their part and it has no doubt cost the party some support. However, rather than the party leadership coming out now to denounce the boycott, they should have done so from the onset.

However, regardless of the outcome of the court case, the UDP should not get so despondent but instead they should regroup and re-organise the party in readiness for the National Assembly elections and the local government elections. They should understand that if they can control the National Assembly and local government, they would be in a position to have a big say in the mode of governance. There is no doubt that they must have learnt very good lessons from the presidential elections which would serve them well in the next election cycle.