The Gambia Taiwan relationship was not a “huge mistake” Mr. President. 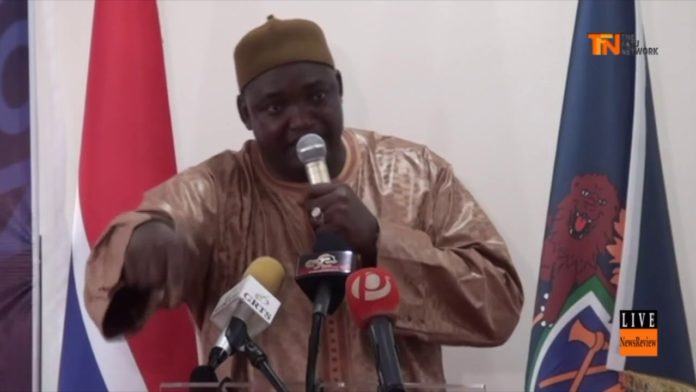 Mr. President, quoting from Reuters news agency (Beijing) “Gambia President Adama Barrow told Chinese President Xi Jinping on Thursday that his countries ties with self-ruled Taiwan had been a “huge mistake”, and he thanked China for all the help it had given subsequently, China said.”

Mr. President, to begin with, the cross-strait relationship between China and Taiwan has been sour recently after Taiwan losing four of its allies (Dominican Republic, Panama, El Salvador, and Burkina Faso) to China prompting the United States to recall its ambassadors from the Dominican Republic, Panama, and El Salvador over these countries decision to no longer recognize Taiwan. The US saw that “China was luring countries with economic inducements that facilitate economic dependency and dominance, not partnership.”

Mr. President, this relationship has a long history of tensions because China feels that Taiwan is inalienable part of China and the use of force to resolve the dispute over the island’s status is still an option and your showmanship of diplomacy to say that “the Gambia Taiwan ties was a huge mistake” to appease their President was pointless. Mr. President, you have to advocate for peace in that region and not to reignite tensions.

Coming back to my topic on why the Gambia Taiwan ties was not a mistake. Mr. President, this relationship wasn’t a huge mistake and here is the reason WHY;

The Gambia officially recognized Taiwan in 1995, from there on the relationship was further strengthened over the years in all government sectors (Agriculture, Education, Health, Infrastructure development, Technology etc.).

Mr. President, I would like to delve into key areas based on Taiwan contribution in developing the human resource capacity of the country. In this article, I would like to focus on the tailor-made programs sponsored by the Taiwanese government in the areas of Petroleum, Information Technology, Agriculture, Health, Civil Engineering, and Architecture.

Mr. President, the Taiwanese felt that there was a growing need for the Gambia to train its citizens when the government was dreaming of the exploration of petroleum in the country. Who would have been the key drivers of this petroleum sector was a question that was hanging. It would have been easy Mr. President, for any company to hire professionals while not employing the citizens to take charge of that petroleum sector. The Taiwanese government felt it was important to train the citizens, believing that educated citizens will always drive the destiny of their country towards a positive path. Thus they decided to start a tailor-made program in petroleum engineering in 2004. They provided Twenty-five students full-time scholarships to study at National Taipei University of Technology which has later become home for all the Gambians in Taiwan. After the completion of their program, they went back home to work for the petroleum company. This is why today you can finally award a contract to FAR Ltd. An Australian company to start drilling in less than 40 days without the knowledge of parliament and the general public.

At your Brikama rally, you have promised the people of Brikama free street light with Wi-Fi. Getting anonymous donor funds and hire experts to install the free Wi-Fi for the community of Brikama is the easiest thing to do but maintaining the infrastructure is key.

In 2007, the Taiwanese government granted twenty-five students a full-time scholarship to study Electrical Engineering and Computer Science. This program was designed to tackle the lack of I.C.T officers in government institutions and the challenges of ICT that lies ahead with the rapid advancement of technology. Today majority of the I.C.T officers in various government departments are products of this program.

At your Numi rally, you promised to bridge Banjul to Barra. Yes, Mr. President, this time I will call it a metaphorical dream. Now, talking about the bridge one would ask whether the Gambia has civil engineers to build bridges of that magnitude? I will say yes, they have. In 2008, the Taiwanese government designed a civil engineering program that covers areas in Geotech, Structure, Water Resources, Environment, Construction Management and IT. The students were exposed to an engineering environment where solid infrastructures are built to resist natural disasters like typhoons and earthquakes and are provided internships outside the university with industries to gain experience and work with professors to conduct innovative research.

Mr. President, before this program there were not more than 20 certified civil engineers in the country. After the success of the first batch, the Taiwanese government further requested another twenty-five students in 2012 to also pursue the same degree program.

Mr. President, we would not love to see were a country granting you loans for a project, have one of its companies bid for the project with 100% assurance of being awarded the said project, export its laborers to work on the project at the detriment of our laborers, when you vow to create job opportunities. In the end, the loan has to be paid by the tax-payers. Who is winning Mr. President?

After many years of sending Taiwanese experts to develop the agricultural sector in terms of rice production, horticulture, aquaculture etc and also transferring modern technology to the sector. The Taiwanese government further decided to strengthen the human resources base of the agricultural department. In 2009, a batch of twenty-five students was awarded scholarships to pursue a degree in agriculture in the most prestigious agricultural university in Taiwan, majoring in Animal Science, Plant Science, Soils, and Agricultural Economics. These students were well equipped in this program. They were well trained in first-class laboratories with high-tech modern equipment to conduct their research in their various specialized areas of study. Mr. President, your ministry of agriculture is headed by these students.

Without delving in detail on the contribution of the Taiwanese government towards the health sector. Every patient in the country felt their contribution because drugs were never delayed, blood bags were always available throughout the country, and doctors never went on strike.

Mr. President, in 2010, the Taiwanese government awarded eleven students to pursue a bio-medical degree program in Taiwan. The program was designed to train the students to become experts in the field of medical laboratory science and biotechnology, an area in which The Gambia never had an expert.

Mr. President, you can’t talk about infrastructure without architectures and urban planners. Before 2011, there were only two surveyors in the country. With this number of surveyors, one would say that the country was in dire need of urban planning and design, environmental protection, infrastructure design etc. Mr. President, we are in the mid of the raining season and the place is full of “poto poto” and flood, and this is due to lack of urban planning. The Taiwanese government in the same way awarded a batch of twenty-five students in 2011, to study Architecture and urban planning. This was a very successful program, run and overseen by top Architects and professors. From modern home designs to mega building designs, planning and construction. Upon graduation, scholarships were awarded to three outstanding students to pursue a master’s degree in architecture and urban design.

Mr. President, I said initially that I was going to focus on the tailor-made programs but here is a brief summary of the overall student’s programs.

Mr. President added to the tailor-made programs, numerous students of various developmental programs were also given the opportunity to pursue their dreams through individual school scholarships and bilateral partnership scholarships such as MOFA, ICDF, and MOE. Most of the individual scholarships also helped Gambians earn degrees in key areas such as Economics, International Relations, Community policing and drug control, Military training etc. Mr. President the Gambia Taiwan relationship was fruitful as it helped develop and sustain some of the departments making progress in your government. Despite the wasteful demands and mismanagement of funds by the previous government, Taiwan goodwill gestures in cash had helped a lot in maintaining our health sector, agriculture, and national security sector. Mr. President, the majority of these students who have benefitted from these programs are today contributing immensely towards the social economic development of the country.

Mr. President, I wouldn’t do you justice without asking you a rhetorical question “Weh weh you” Mr. President, when all these were taking place?