THE DOWNFALL OF APRC: Factions Bicker Over Who Is Culpable For the Split 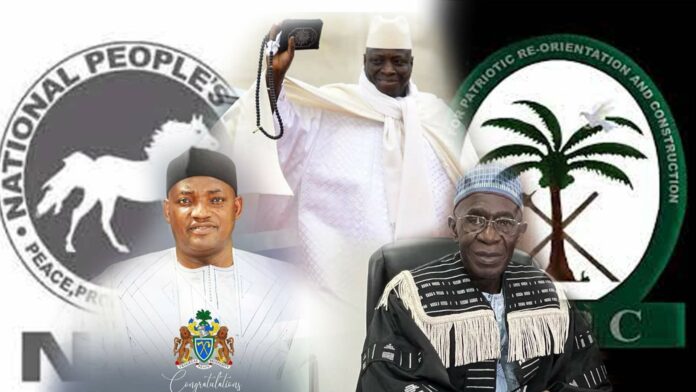 Coming right on the heels of former Gambian President and founder of the Alliance for Patriotic Reorientation and Construction (APRC), Yahya Jammeh’s apparent letter to the Independent Electoral Commission (IEC) requesting the electoral body to recognise the Yaya Tamba-led APRC camp instead of the Speaker of the National Assembly, Fabakary Tombo Jatta’s APRC, Pa Modou Mbowe, the spokesperson of Jammeh-recognised APRC has said Fabakary Tombo Jatta, the IEC-recognised leader of APRC, is responsible for splitting both the United Democratic Party (UDP), the biggest opposition party in the country, and the APRC party for his personal “interest” and the “incumbent”.

“The problem is the interim party leader who split UDP into UDP and NPP and also split APRC for his interest and the incumbent.”

Pressed on how Fabakary split UDP into two factions, the outspoken member of the Jammeh-led APRC faction explained to news anchor Sarjo Brito during The Fatu Network’s News Review Programme:

“We heard President Barrow in Sukuta, during the Presidential campaign, praising Fabakary for his loyalty; that he was coming to his office with Seedy Njie in 2017 and the advice he (Fabakary) gave was for him (President Barrow) to split from UDP so that he (Fabakary) will bring APRC to him.

Probably that is his (President Barrow) only chance of maintaining his incumbency because with UDP, UDP definitely has a flagbearer and that is Honourable Ousainu Darboe. So, that is the split because Barrow said he could not digest the minute Fabakary said it but at the end that was his interest, he had to follow his interest.

With Fabakary we (APRC) had some mega rallies and everybody saw APRC in their numbers, green; Gambia was green and that convinced Barrow that yes, I should work with Fabakary. Again, Fabakary came and split APRC to bring the two houses (NPP and APRC) together for NPP’s interest and now he reaps the benefit as the Speaker of the National Assembly together with Seedy Njie, the guy who was taking him to State House in 2017.”

Meanwhile, Dodou Jah, the PRO of the Fabakary-led and IEC-recognised APRC, refuted Pa Modou’s claims that Fabakary Tombo Jatta was responsible for the split, suggesting former President Jammeh was, in fact, responsible and that it was because of a decision he made which triggered the idea of an alliance within the APRC camp.

“Since 2018, we went to congress, we had an interim party leader when we selected the former President, His Excellency Yahya Jammeh as the supreme party leader of APRC. Of course, this is not in line with the APRC constitution but as an honorary title we gave it to him and we selected an interim for the time being because all our expectations were he is coming back to this country.

After all, that was the information we were receiving. Communication was going on smoothly between the interim party leader and the supreme party leader and as far as we know, engagements were done with the government of the day; the President I would say.

Many a time, APRC was accused of frequenting the State House and that was upon his (Yahya Jammeh) request. People were identified and selected for them to run this process that would be in the interest of the party and all of us.

I think, in short, that is what led us to start to look into which party we would do an alliance with when we realise that he was not coming home before the election and APRC as a party was not putting up a flagbearer to contest the election, we needed alliance and congress 2021 resolutions; it provided and tasked the executive to look into any party or any possible partner that we will go into alliance with. We tried with GDC, but we could not succeed. We tried with GANU, we tried with Gambia Action Party, and we also tried ANRD of General Lamin Bojang, so eventually, it was NPP that was endorsed and the majority said they were in for the alliance and that was what led to us doing a consultative meeting in all the regions to seek for people’s consents.

In every constituency, people were invited to represent so it was not a decision alone of the executive but the party membership as well. But that phone call in Kanilai from the former President — that is where the division started and how it was created,” Dodou Jah, spokesperson of the Fabakary-led APRC said.

However, Pa Modou Mbowe argued that the split happened well before Jammeh’s phone call, saying “Jammeh’s phone call was on the 15th of October, 2021, a month or so prior to the election but the split happened well before that because when they started the so-called consultative tour Dodou is talking about, it backfired at Marakissa from the word go. They said no, listen, we are not going into any alliance with NPP.”

Since last year’s Presidential election, the APRC has since split into two rival camps; with Fabakary and his factions coalescing with President Barrow and his NPP ruling party while former President, Jammeh and his faction allied with Mamma Kandeh’s Gambia Democratic Congress (GDC) party.

Fabakary Tombo Jatta has since been selected by President Barrow as the Speaker of the National Assembly with Seedy Njie being his deputy.