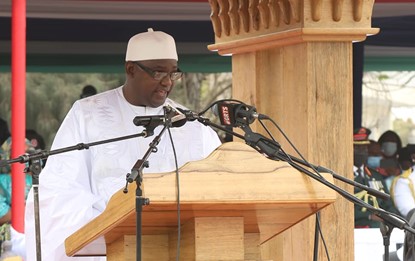 President Adama Barrow has said that one of the major challenges the African continent (this includes The Gambia) faces  is the attainment of economic independence after attaining political independence.

The President made this important topic his talking point during the delivery of his speech at the Mccarthy Square, Banjul, on the occasion of The Gambia’s 57th Independence Anniversary Celebration.

“In this era, the dilemma of African countries largely remains the attainment of economic independence in an inter-dependent world. Like many other nations around the world, this is one of The Gambia’s major challenges,” President Barrow said.

He further noted that, although he holds the view that absolute economic independence is impractical, it is certain that it can reduce the continents (generally) and the nations (particularly) heavy dependence on the outside world.

But how can we do this meaningfully? he asked.

“The solution depends hugely on how practical we are and how far we choose to go in raising our productivity and production capabilities and outputs while minimising imports and maximising exports,” Barrow answered.

The head of state went on to note that the imbalance between imports and exports for The Gambia is enormous, and this needs to be offset.

Generally, he noted there is a great need to transform the population into a more productive resource.

To free the nation from economic dependence, President Barrow, among other strategies urged Gambians to invest more freely in the productive sectors, produce as much of what they consume as they need, and eat more homemade products. In the same vein, he encouraged people to expand and patronise local businesses, while developing, encouraging and tapping local talent.

“A lot of potential to increase national income generation lies in organising our communities to set up joint businesses, engage in more productive ventures, and make the most of our natural resources. Old and ineffective approaches have to give way to greater application of technology and modern techniques of production,” Barrow said.

President Barrow used the occasion to share his vision for The Gambia. The vision includes a nation with top-class infrastructure, sufficient energy for national coverage and a technology-supported society that matches the digital world, all of which propel growth, economic development and social cohesion through an adequately equipped human resource base.