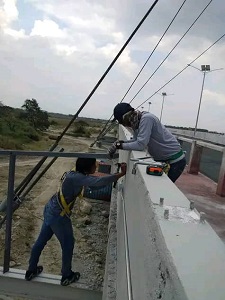 The president of the Republic of The Gambia, His Excellency Adama Barrow has highlighted that since its inception in 2019, the “Tekki- Fii” programme promotes attractive employment and income opportunities for young people, created and sustained more than nine thousand (9000) jobs to narrow the unemployment gap.

President Barrow made these remarks while presiding over the official closure of the “Tekki-Fii” Programme and the launching of the National Employment Policy and Action Plan (NEAP 2022 -2026) at the Kairaba Beach Hotel on Friday.

“The Tekki-Fii Programme created and sustained more than nine thousand (9000) jobs, enabled more than seven thousand (7000) young Gambians to undergo skills training and worked with close to five thousand (5000) small businesses. The two events have a bearing on each other, with the policy providing long-term solutions to the challenges that the Tekki Fii intervention sought to address in the short term. Given the positive results of the Tekki Fii Programme, it is with a deep sense of accomplishment and much optimism for the future that I join you here in person,” President Barrow stated.

He also pointed out that the stories and results associated with it are indeed inspiring. among other things, they give the government renewed hope and strengthen their faith in the youth. The President also recalls his youthful struggles in the United Kingdom to inspire the youths.

“I worked as a security officer in the UK, and it took me 3 hours to get to my workplace. I came back in 2006 to start my business with a capital of D100,000. This is what lead me to where I am today as president of the Republic of The Gambia,” president Barrow explained.

He advised young people to be honest in their business dealings, committed and self-confident.

Programme officials believe that the Tekki-Fii is more than a programme; It is a belief, an idea and a concept that youths can be successful in the Gambia without travelling outside; the seeds of which are germinating and bearing fruits across the country.

Launched in 2019 with the support of the European Union in The Gambia and jointly implemented by International Trade Centre, IMVF, Deutsche Gesellschaft für Internationale Zusammenarbeit (GIZ) GmbH & Enabel, the programme is aimed at promoting attractive employment and income opportunities for young people.

According to the programme officials, the Programme has registered important gains and showed that the combination of skills training, entrepreneurship drive and investments in small business is an effective strategy to create economic opportunities.

The closing ceremony accorded us the opportunity to highlight the successes of the programme and also joined the Government of The Gambia in launching a policy that will build on and sustain the gains made. The launch of the national employment policy and action plan (2020-2026) is the replacement for the ” Tekki-Fii” programme.