Teenager in hospital after being pummelled by mob; mother seeks support for treatment 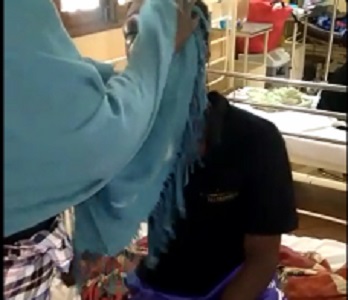 Yafatou Corr, a woman residing in Sanchaba Sulay Jobe, has been left sad and worried as her 18-year-old son, Muhammed Trawally, escaped death after he was allegedly ganged up on and beaten by a group of people in the capital Banjul weeks ago.

She is seeking support to finance the medical bills of her son.

According to a police report obtained by The Fatu Network, the boy suffered a severe beating resulting in brushes on his face and other parts of his body.

According to the mother, he went to Banjul with his mates; some people were fighting, he went to separate them.

“Unfortunately, some of these people were angry with him and that’s how they began to beat him.

“He was trying to separate the fighters and a girl told him that he is a hypocrite.

“She hit him with an electric cable, and she ran to their house and came back with it on a row again and hit him in the hand.

“Muhammed was still trying to defend himself until another woman came from nowhere and grabbed his hands.

“At this time my son was helpless and that is how they beat him until he was unconscious.

He sustained several injuries all over his body,” Yafatou narrated how her son was allegedly beaten.

18-year-old Muhammed is currently admitted to the Edward Francis Small Teaching Hospital in Banjul where he is undergoing treatment.

“I want people to support me so that my son can get the necessary medical treatment,” Yafatou Corr pleaded.

TFN can also confirm that Muhammed is currently unable to speak clearly since after the assault.

His mother said everything will be clear when he can speak again so that he can narrate to the authorities what happened.

Three people have so far been arrested in connection with the assault and are currently under custody according to the relatives of the boy.

The family is urging people to support them so that their son will get medical treatment before his conditions get worse.