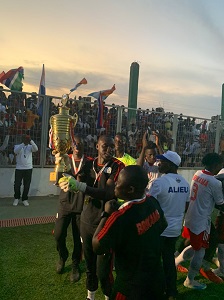 In the last competition, Gunjur, the Dabanany boys, humiliated Brikama in a 6-2 win in a home and away semi-final encounter before winning the first edition in a crowded final against Sanyang.

This edition, Brikama, thirsty to put an end to defeats against Gunjur and win the West Coast zonal, assembled a vibrant team led by Sheriiff Mankajang as the new head coach.

Gunjur began the game on the front foot with quick dangerous runs in the Brikama area and eventually won a penalty in the 2nd minute of the game. However, disappointedly, last season’s golden boot winner Baboucarr Bojang, stepped up to take up the commitment but could not put the ball at the back of the net with a brilliant safe from net-minder Ebrima Fadera.

After the missed penalty, Brikama regrouped themselves up front and launched an attack in the Gunjur defence line. Lethal attacker and one-time Gambia Football Federation Division One league golden boot winner Saikouba Ceesay set the stadium ablaze to a wild celebration when he netted home from Babucarr Sallah’s splendid cross in the 4th minute of the game.

Gunjur, after going a goal down, tried hard to respond with chances few and far but couldn’t find the ball at the back of the net.

In the recess, Brikama capitalized and extended the lead when dazzling, tricky and agile Babucarr Sanneh dribbled past Gunjur defenders and smashed home a breathtaking goal at the back of the net just 2 minutes into the second half.

As if that were not enough, Morata, as fondly called, wrapped up the day when he did a quick run and splendidly slot home his second of the evening and Brikama’s third of the night to end Gunjur’s dominance over the Satayba boys.

Speaking to The Fatu Network, the man-of-the-match award winner, Baboucarr Sanneh, said it is a revenge time for Brikama. The dazzling winger said this season will be Brikama’s.

“We were beaten by Gunjur home and away last season. So as a native of Brikama, I took it upon myself to help my town to win this game and the trophy against Gunjur. We did this, and we are ready to win the zonal competition but regional zonal and national competition,” he told The Fatu Network.

As winners of the super cup, Brikama headed with a giant trophy sponsored by Honorable Lamin J Sanneh of Brikama South and a cash prize of fifteen thousand Dalasi. Gunjur pocketed home ten thousand Dalasi as a consolation prize.

Moe Ebrahim Secka: From a labourer in Qatar to participating in world’s biggest fitness competition in the U.S.