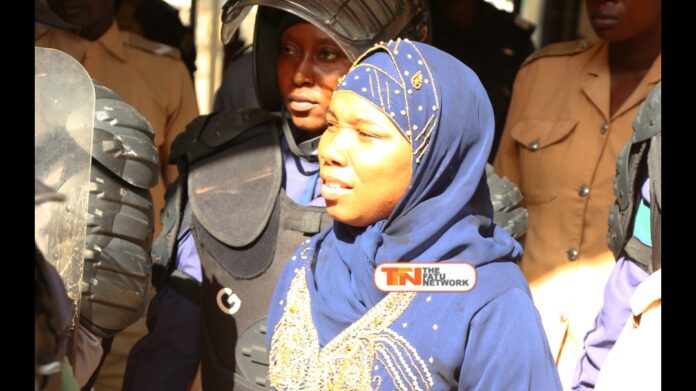 The trial has begun for Sainabou Mbaye, Cherno Mbaye and Kibily Dambally at the High Court in Banjul as the trio faces a two-count indictment which alleges their involvement in the alleged manslaughter of one Muhammed Mbaye, who is a nephew to the first and second accused persons.

Sainabou, Cherno and Kibily; 1st, 2nd, and 3rd accused persons respectively, were arraigned on Monday, 4th October 2022 before Justice Jaiteh of the Banjul High Court where the charges of “manslaughter” and “child exposure” were read to them. They denied both charges giving the prosecution, who had their witnesses on hand, the burden to prove its case.

In what was a marathon hearing – from 10 a.m. to 4 p.m., the Prosecution called three witnesses who were all police officers from the Serious Crime Unit in Banjul Headquarters, and each of them being an officer who obtained statements from one of the three accused persons regarding the alleged manslaughter.

Jankey Manneh was the first witness to testify in the case. She told the court she was assigned by her supervisor to obtain the cautionary and voluntary statements from Sainabou Mbaye, the 1st accused person in the trial, which she did on the 22nd and 23rd of July 2022 with one Babucarr Colley as the independent witness.

“I took the 1st accused to one of our offices where I asked her if she would be comfortable in that room. She replied, “yes,” the Corporal told the court, adding that she explained to the 1st accused that she needed not to say anything unless she wishes to because the statements would be presented in court.

The witness continued that the suspect, who is now the 1st accused told her she was tired and wanted to rest because she travelled from Senegal and arrived at 8 p.m. The witness told the court she contacted her supervisor who commanded her to allow the suspect to rest.

The following day, she narrated that, she got an independent witness in the name of Babucarr Colley, at around 8 a.m., who she said is a businessman.

“At the end, I read everything and translated it in Wollof to the suspect which she confirmed to be the true version of the statement,” Corporal Manneh narrated.

During the cross-examination, counsel Drammeh for the 1st accused asked the witness about where she got the “so-called” independent witness and how long he stayed at the station. The witness replied that he was brought by her supervisor at 8a.m. and was there till 11 a.m. on the morning of 23rd July.

The Defence for the 1st accused asked whether there was any autopsy report during the obtaining of statements; to which the witness replied “no.”

“It is correct, is it not, that your statement taking was just a question-and-answer session,” counsel asked, putting it to the witness that Mr. Colley is a friend of the police.

The Prosecution tendered the cautionary and voluntary statements of the 1st accused which were admitted and marked as exhibits P1 and P2 respectively.

Another witness that testified for the Prosecution was Samba Mballow. Mr. Mballow is a Farato-native corporal who works at the Serious Crime Unit, just like the first witness.  He was the one who obtained the statements from Kibily Dambally, the third accused person in the case, on the 20th of July 2022. He told the court he was assigned by his supervisor to obtain statements from the 3rd accused.

Kibily was provided with a Sarahule interpreter in the courtroom because he said it was the language he speaks well. The language issue was a bit contentious during the cross-examination when the Defence counsel for the 2nd and 3rd accused persons asked the witness about why he interviewed her client in Fula, when in fact, her client preferred speaking in Sarahule.

“In fact, he preferred to speak Sarahule but you told him there was no Sarahule interpreter or speaker” but the witness replied, “Kibily Never told me that.”

The independent witness called by the 2nd witness is Fabakary Kinteh whom the witness said he did not know when asked by the council.

The cautionary and voluntary statements of the 3rd accused were also admitted and marked as exhibits P3 and P4.

Mr. MI Senghore was the third witness called by the Prosecution. He is an Assistant Supervisor at the Serious Crimes Unit. He was the one who obtained Cherno Mbaye’s statements, the 2nd accused who he said spoke in the English Language.

“An independent witness was called and was cautioned and charged,” Mr. Senghore, who became known as the supervisor of the first and second witnesses told the court.

The witness was one of the investigators who went to Brusubi to “reconstruct the scene.”

“When we reached at the scene, the first thing we did was to position the vehicle exactly it perhaps was,” the witness said, referring to the vehicle used by the accused persons.

“We also met a neighbour who goes by the name Adama Bojang and interacted with her as to what she saw on that fateful day,” continuing that they observed, “the vehicle used by the accused persons was parked some meters from the gate of the newly rented apartment of the first accused (Sainabou Mbye).”

The Counsel for the 1st accused asked whether the investigators have investigated how the deceased got into the vehicle to which the witness replied, “our investigation focused on the circumstances surrounding the death of the child.”

The Counsel asked whether they have investigated the effect of water poured on the deceased by Adama Bojang, a neighbour the witness said they interacted with at the scene. He replied “no.”

“I’m putting it to you that your investigation is not correct that is why you brought charges,” counsel Drammeh said.

The Case was adjourned to the 5th of October 2022 for the continuation of cross-examination by the Defence of the 2nd and 3rd accused persons.