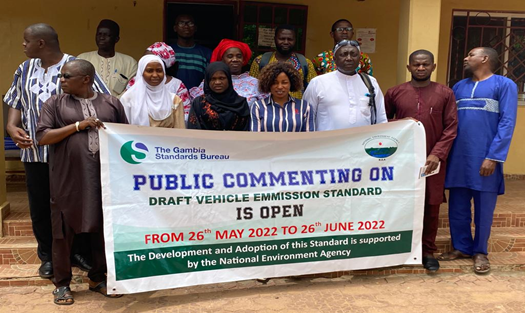 The Gambia Standards Bureau over the weekend engaged the Technical Advisory Committee (TAC) members of West Coast Region on the draft standard for vehicle emissions.

The forum was held at the Governor’s office in Brikama. The technical advisory committee is a body comprising heads of government institutions and non-governmental organizations (NGO’s) in the region.

The meeting, which was marked by arguments and counter arguments by various participants, provided stakeholders the opportunity to get their inputs captured in the document.

Responding to concerns that it’s a custom to develop draft laws but implementation is normal the problem, Mr Ebrima Jallow, the Director of Standardization at the Gambia Standard Bureau, assured participants of the political commitment on the effective implementation of the vehicle’s standards regulations.

Madam Binta Sey Jadama, who represented the governor at the forum, spoke of his appreciation for allowing members of TAC to brainstorm on the draft standards document. “I urge you to provide hard copies of the final document to relevant stakeholders. It is often different if you ask people to access the document through online,” Binta Sey pleaded.

The National Environment Agency was the institution assigned to draft the document and where ably represented by Seedy Barrow who expressed the willingness of his institution to partner with Standards Bureau in the national task.

The document, if successfully implemented, is said to significantly contribute to the reduction in greenhouse gas emissions and respiratory illness as smoke from non-roadworthy vehicles pose a threat to the environment and people’s health.

Consultation on the draft document is ongoing but as it stands, the recommended emissions limits for all light-vehicles is 10 years and 15 years for heavy duty vehicles.

The forum for regional authorities in West Coast Region is part of their nationwide engagements prior to the gazetting of the document.