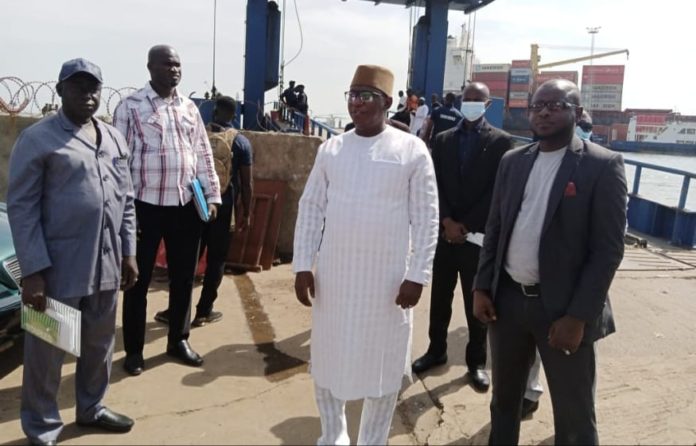 As part of the on-going efforts coupled with continuous security assessment of the country, Ousman Sowe, the director general of the State Intelligence Service (SIS) has stated that the country remains calm as he begins a national security tour.

He thus urged Gambians to be tolerant, restraint and be accommodative.

“The country remains calm but we encourage Gambians to interact, be tolerant; be responsible and be measurable. Gambians are always known to be tolerant and always do engagement and social networking. I believe if Gambians come together and see the country first and see the forthcoming election as just an event, then we will be able to pass through and should deescalate the tension,” he said

DG Sowe, who was speaking to journalists yesterday at the Banjul Ferry terminal as he began a nationwide national security tour, said: “There’s no need for us to have tension in this country. December 4th will come and pass and we will remain in the country as Gambians. As we begin our countrywide tour, we will also be talking to communities and we will be having radio talk shows to all the FM across the country with a view to preach peace and also spread our security messages and calls for security consciousness in this period.”

The country’s spy chief will also be interacting with regional governors, community members and different stakeholders during his nationwide tour. The tour will also avail him the opportunity to have face to face discourse with Gambians on the need to maintain peace in the country. Sowe will also be opening new regional commands across the country as part of their commitment in bringing security to the door steps of every Gambian.

He added: “We are embarking on this tour for the fact that it has been an annual activity that we have been carrying out over the last four years as part of reforms and restructuring of the service.”

“I want to thank the Gambians people for the support they have been rendering to the service over the past four to five years. It has been a very eventful year. In the process, the service has consciously dedicated itself and committed itself to reforming and restructuring the service. As part of that, we had a conscious roll out programmes throughout the country of which annually we go around and access the state of national security, access the state of our relation with the communities whom we are committed to serve,” he posited.

Security, DG Sowe went on, is everybody’s business. “We might have national responsibility or accountability but security is everybody’s business and that’s our approach to it. We involve almost everyone with a view to take security as their own. If each and every one of us takes security as our responsibility, then the country will continue to witness rapid socio-economic development.”

He further added: “We might have the security concept at the office; however, the people in the field also matter. We have the National Security Belt Initiative which is aimed among others to repeal our deployment across the country especially at the borders. Therefore, meeting Gambians across the country who are really the recipients of security itself and hearing from them is quite important. We are going through a period that’s unprecedented. We are going to have an election in less than a month, thus it is important that we assess the country’s security situation,” he emphasised.

“We want to thank the public for their continued support of the service. Everyone has witnessed where the SIS came from and where we are today. We are committed to the reforms, restructuring and the repositioning of the service to the best interest of the public. I also want to take this opportunity to call on the public to make security their business. Security matters to all of us. All of us need security and I think what we are seeing in the country with all the proliferation of political activities, really this is also a testimony to the security environment we have.”