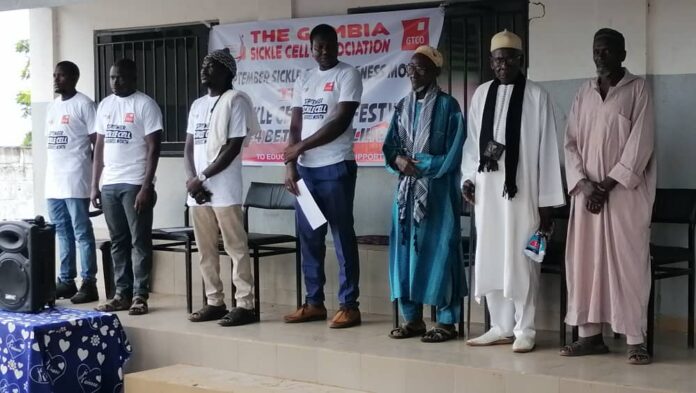 As part of the Sickle cell awareness program, the Sickle Cell Association visited Kiang Tankularr LRR over the weekend.

It’s believed that the highest number of sickle cell patients are registered in this part of the country, prompting the association to visit the village.

Speaking to the people of Tankularr, Mr Alieu Sambou the president of the Association said they are delighted to visit the village and share relevant things with them regarding the disease.

He first started informing the gathering that he is shocked that there is no health facility nearby apart from MRC which is all the way in Keneba. He said considering how serious the disease can be, especially when you have an attack, it needs an immediate check-up from a doctor. He said what will happen if you have to travel Kilometers to a health facility. He said after their visit he will convey the message to the Government through the Health Ministry to inform them about how important it is for Tankularr to have a health facility.

Mr Sambou informed the residents that June is always sickle cell awareness month, but they could not do it this June because some of their prominent members passed away. He informed the gathering that sickle cell disease is not only in Tankularr but a disease affecting millions of people worldwide.

“Every month over a hundred thousand kids are born with Sickle cell and almost half a million people die of the disease every year”.

He told them there is no need to panic and advised them to be visiting the health centre frequently and taking their medications as advised by a doctor.

Turn by turn many sickle cell experts mainly from MRC and RVTH took time to speak to the people of Tankularr and discuss the symptoms of the disease.

Modou Bella Jallow and Dr Masering Njie took to the podium and told the audience that they should see a doctor for advice before getting married. They said it’s important for one to do a test to see if your partner is compatible for marriage. They said most sickle cell disease is because of intermarriage among very close family members.