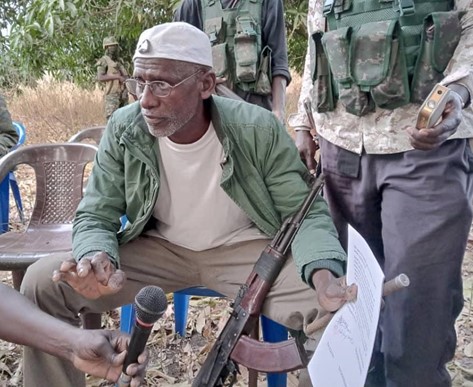 The leader of the Movement of Democratic Forces of Casamance (MFDC), the main separatist movement in the Casamance region of Senegal, Salif Sadio has issued a stern warning to The Gambia following a deadly clash between members of his group and Senegalese soldiers on Gambian soil.

Speaking in a rare interview at his Base in Casamance, Salif Sadio told reporters Gambia must refuse to be used as a battleground in the ongoing conflict between the government of Senegal and the MFDC.

Sadio said the only reason he and his men decided to retreat during last week’s incident was because of the longstanding relations between the people of Cassamance and Gambians living along the border but warned that any other attack on his men from Senegalese soldiers based in The Gambia will be met with deadly consequences.

“The population of Cassamance and that of the Gambia living in this area are all inter-related. All I ever asked is for the rights of my people to be respected and for the people of Cassamance to be free. why should that cause a fight?

But if you Gambians allow yourselves to be fooled, asking you to take part in this conflict, then you must know they have a hidden agenda. They did it to Guinea-Bissau and a lot of people died. It Is not like my men and I were chased from our base in that area. I had to think and retreat because I realised the people who were caught in the crossfires were relatives. Because there is not one from Bissau who doesn’t have family ties in Cassamance,” Salif Sadio said.

He further noted that he had said this a long time ago before the day came, that ECOWAS will transform The Gambia into their battleground to fight the MFDC. He maintained that the reason he chose to stand down is because children had to go to school and these are his children too because their parents are neighbours and relatives.

“They are African children who need to be educated. Just look at the surrounding, everyone fled their homes. That alone is a regret to me. So, go and tell the Gambians that what happened this time must not repeat itself because when it does, there will be regrets. Your army and their uniforms do not faze me. There is only one thing in war, you either kill or you are killed.

War is an art to me, and I am not afraid of it. Tell Gambia I said this must not be repeated. I stood down this time, but I won’t next time it happens. I will kill even if my wife or child is there. This fight is between me and Senegal. We have been in this fight for 40 years and never have you heard shots in Gambia fired by the MFDC,” he said sternly.

The Senegal-Cassamance conflict was ignited in 1982. The separatist group MFDC has called for the independence of the Cassamance region. The conflict often described as low-level has claimed thousands of lives in the region and displaced many.