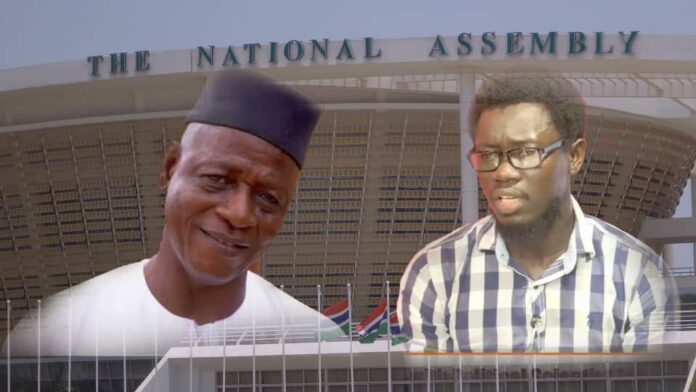 Coming against the backdrop of unsatisfactory public reactions and staunch criticism of the recent State of the Nation Address (SONA) by President Adama Barrow and the continuous timid inaction of the National Assembly in acting and addressing perennial social and political issues affecting ordinary Gambians, Political Science lecturer, analyst, and outspoken social commentator, Essa Njie, has said the country’s current crop of lawmakers is very likely the worst in the nation’s history.

Mr Njie, who was speaking on a wide range of issues, including the recent political climate and the effectiveness or ineffectiveness of the National Assembly, did not bite his tongue in his assessment.

We also saw a D54 million loan and then what we saw recently was when they allocated themselves D100,000 each for clothing allowances when a lot of people they represent don’t even have access to clean drinking water.

People are paying you from the taxpayers’ money. Do people have to provide the money for you to buy clothes to wear when going to Parliament? You get that from your salary. So, it is unfortunate, but I have to say that this might be the worst Parliament that the Gambia ever have because we have parliamentarians that don’t really understand their function, their role, or they don’t care about the welfare and wellbeing of the people that they represent,” the political scientist noted.

Njie further said the current crop of National Assembly Members does not even crosscheck or critically weigh what is being fed to them at Parliament.

“What we are seeing in Parliament is those people who contribute don’t even critically…look at the statement revealed by the President in his State of the Nation Address. He made mention of something which I think every Gambian should go and fact-check. The man said since the beginning of the 2021-2022 tourist season, the Gambia received 53 flights a week: an average of 8 flights a day, where? And nobody seems to care. Parliamentarians should have asked this man, the Minister of Tourism should have been there and when he was there, he should have been asked: The President said 53 flights come per week, where are all those tourists when hotels and restaurants and bars are closed? Where is the money going to? We want to see that money coming but nobody is asking those relevant questions, instead what we are seeing is that people praising the President for delivering what I call a mere activity report,” Njie said.

This National Assembly is different because there is no dominant party. The party that has the majority has only 18 seats followed by the second party with 15 seats and 12 independents with other parties with 2,4 and so. This is the best composition of Parliament that Gambia ever has, so therefore it will be really not in proper context if anybody should just look at the National Assembly and say this will be the worst National Assembly. But what I can assure Gambians and the political scientist is that he will be proven wrong at the end of this sixth legislature because the achievements will be enormous, no doubt about that,” he claimed.

Speaking on Njie’s claims that this current batch of NAMs barely know their functions and roles and that they seem not to care about the people they represent, the seasoned NAM dismissed those claims as just an open criticism which is not based on any tangible facts.

“Again, that I take as just an open criticism which is not based on any tangible facts. Each of the Members of the National Assembly is elected by a group of people in a particular constituency and I cannot understand how that National Assembly Member can give his/her back to those who have elected them so that one is just a baseless argument.

To say these current National Assembly Members don’t know their roles, we have 20 Members of the National Assembly who have been re-elected; they were there five years ago, and they are back again,” NAM, Serrekunda West, said.