Risking his teen life on the perilous journey to Europe, Jibril realises his childhood dream in Italy with a law degree 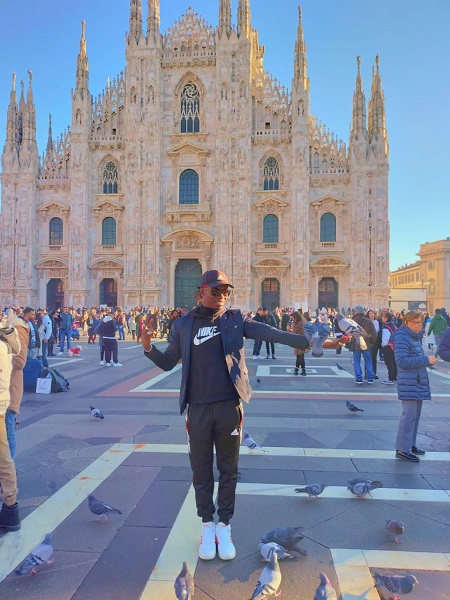 In 2015, 16-year-old Jibril Boja (spelt Bojang in Gambia), who at the time lacked fate in actualizing his dreams of a better future and quality education, left the shores of The Gambia through irregular migration that would land him in Italy, Europe, after over a year of hard, perilous journey. From being a fisherman in Senegal to working on the farms in Northern Africa, Jibril’s route to achieving his dream was not a walk in the park, but just like a diamond, he turned out shining after undergoing enough heat and pressure.

Seven years on from fishing in the boats in Senegal to labouring on farms in Northern Africa to crossing the Mediterranean Sea to Italy, Jibril Boja has actualized his childhood dream in a foreign land, miles away from his country of birth.

Jibril’s journey to Europe is similar to many young Gambians who embarked on irregular migration to Italy. However, at his age and how he achieved his accomplishments, make his story a unique tale of a migrant who lost hope in the educational system of his country, and at a younger age, doubted if a poor boy will make his dreams come through in the Gambia.

Jibril was born in New Yundum, in the West Coast region of The Gambia, in 1998. He had a very difficult childhood growing up in the streets of Yundum. At the age of 3, Jibril’s parents divorced, which would deny him from enjoying the love and care of both parents. Unfortunately, in a short time, he lost his mother; A loss Jibril wished had never happened.

Growing up in the street of Yundum without his mother, Jibril lacked parental support for his studies, unlike many children attending school. Whenever his dad, a soldier, goes on a peacekeeping mission away, Jibril would be left alone and struggled to go to school, unlike his colleagues. But Jibril, young and tender, knew the challenges children from underprivileged families face within the Gambia.

“I normally beg for rides on the highway to school if my dad is not around. However, as a dreamer, I knew at a very young age that growing up without a mother and without a rich family background is painful. Besides, it makes it hard to make one’s dreams come to reality,” he told The Fatu Network.

With several challenges on his way and growing up without his Queen mother, Jibril planned his path. He believed that he would not have made the forward step he needed in life if he had stayed in the Gambia. He lacked fate in his prospect in his country of birth; thus, at the age of 16, as a teenager, he left the country unannounced to Senegal where he briefly served as a fisherman to support his journey before moving to northern Africa where he served on the farms as a farmer before using the Mediterranean Sea to Italy.

He told The Fatu Network that his loved ones never wanted him to go on this journey due to the risks and challenges that it comes with, but determined to be there, Jibril embarked on the journey regardless.

“At the age of 16, I chose to sacrifice my life to travel to the promised land to fulfil my dreams of having a better education. I think that it is my duty and responsibility as a young boy to have a better education so that I can live the dreams of my life. My loved ones never wanted me to go, but the fact is that I believed I was a dreamer. I decided the idea to conquer fear and face my responsibilities and duties as a teenager, and in the end, I have seen the promised land. After seven good years, I have realized my dreams in my basket,” the young, Jibril, joyfully told TFN.

When the ambitious dreamer crossed the Mediterranean Sea, he briefly stayed in an accommodation Center in Reggio di Calabria for one month before being transferred to a catholic community minor’s accommodation centre for two months. He was later moved to the small town of Oppido Mamertina Comune where he began a high school diploma in Computer Science in 2019.

In the same year, in pursuit of his childhood dream of better and quality education, Jibril got enrolled at the University of Turin to study International Law and graduated with Honors and now planning to do his master’s in International Law.

Jibril, despite losing fate in his country where he lived as a teenager without his mother, said he still likes his country and will like to come back and work for his country when he did his master’s in International Law.

The young international law budding expert is equally a songwriter and human rights activist. Knowing what he experienced in the Gambia, Jibril urges the government of the Gambia to support bright students from underprivileged families with scholarships because it is only through quality education that they can change the fortunes of their families.

He advised young and hopeless young people in the Gambia to never lose hope entirely. He encouraged them to be steadfast in their dreams, and they will get to the top with hard work.

Share
Facebook
Twitter
WhatsApp
Linkedin
Viber
Previous articleAs court strikes out his case, Sabally not ready to back down
Next articleWho will NPP pick for the BAC chairmanship election?