RESISTING THE LURE OF EUROPE: Mbye Calls Off ‘Backway’ Dream to Feed Family Through Rice Cultivation 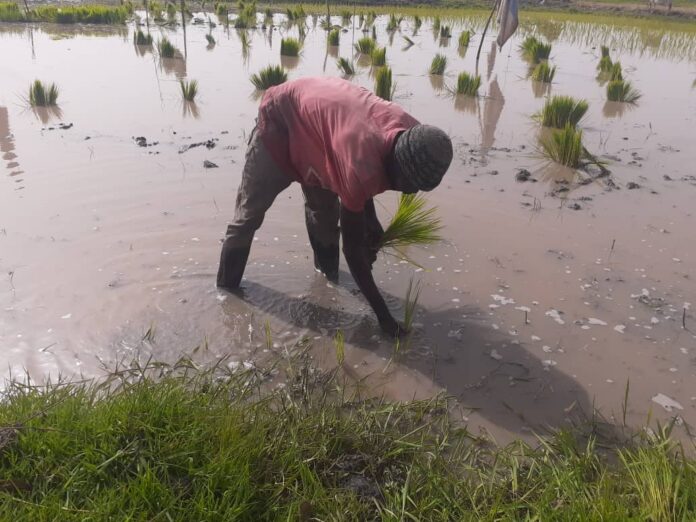 Sait Mbye, a 30-something-year-old Gambian who once harboured the desire to embark on an irregular migrant to Europe — a term known in The Gambia as the ‘Backway journey’ — but later on changed his mind and stayed back, has disclosed to the Fatu Network that he has ventured into rice cultivation to enable his extended family to store enough food for home consumption.

Mr Mbye is a youth farmer in his mid- 30s and is a native of Cherr-Madado village in the Central River Region (CRR).

“If all of us who should help the elderly in the fields left, it would be difficult to grow rice on a large scale. Elders struggle with work on farms but when youths are around, the work is faster and more efficient,” Mbye said.

Mr Mbye and his extended family now enjoy the fruits of their labour as rice cultivation has become very industrious for them. Irregular migration has a negative impact on the labour force of the country. The youthful population that provides the bulk of the labour has embarked on the risky journey, where they had to cross the Mediterranean Sea in desperate need of greener pastures in Europe.

“I initially got the zeal to go for greener pastures in Europe via the irregular migration route but I never regret abandoning the decision. I jointly grow on a few hectares of land with my family and the harvest is stored for home food and a portion is also taken to the market for sale.”

Food Security means that all people, at all times, have physical, social, and economic access to sufficient, safe, and nutritious food that meets their food preferences and dietary needs for an active and healthy life

The Central River Region, where Mr Mbye’s village is located, normally grows rice in swampy areas and he said this allows them to cultivate constantly.

“The amount of money spent on imported rice is huge and is becoming unbearable for an ordinary rural household. Rural communities need to engage in aggressive farming of food crops to attain household food security. Retail prices of basic food commodities increase sharply daily and if alternative measures to feed ourselves are not put in place, a potential hunger will loom. The swampy areas retain water for a longer period which enables us to carry out our rice cultivation constantly.”