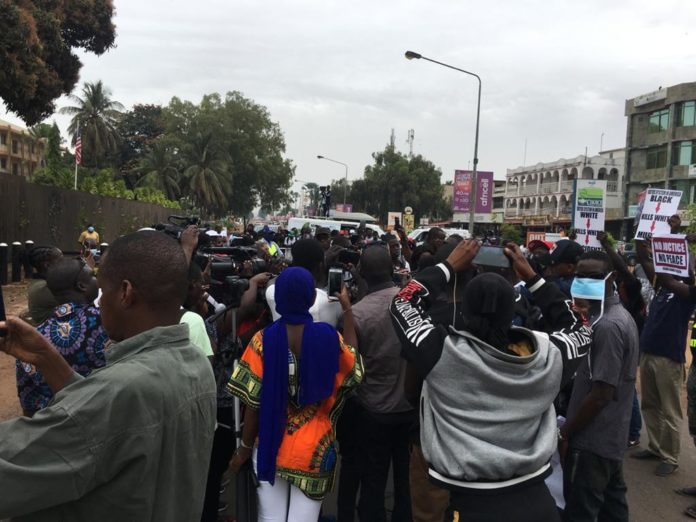 What happened to George Floyd and Lamin Ceesay is a sad story that no one wishes to happen because they both deserve to live like any other American citizens. I condemn racism in the strongest term possible, because it does not promote diversity of the human kind.

In as much as I hate to see black people being subjected to racism around the world. The just ended Protest organised by few Gambians is nothing but a discriminatory one.

In The Gambia we have very painful stories that requires the same amount of attention as the show that is just put out today for George Floyd, but it was never done for our fellow brothers.

What puzzle me about the today’s protest is, what the protesters cannot do for their own citizen brothers is what they had done today for an American citizen.

In the Faraba incident at least three youth were killed for claiming their land and nothing was done or organise for them by the George Floyd protesters.

A Garawol man was shot by the Senegalese’s force in The Gambia and he was abducted to Senegal and no one protested for him too.

Despite our political differences, Solo Sendeng puts his life for this country and no group of protesters ever organise one to demand justice for his death.

All these mentioned above are real in The Gambia and are all against human rights but were never protested upon to give them justice.

As I am speaking more than $20m is so far raise for the Floyd’s family. The million dollar question is what have we ever done in the name of the people we lost?.

If our own brothers are killed in our own country and there is nothing we can do for them, but prefer to request for a permit for an American to demand justice for his death. The question is where does our nationalism lies?

The death of Lamin Ceesay is a very unfortunate one just like the death of our other Gambian brothers.

All Gambians deserve equal call for justice as all lives matter to our nation.

Share
Facebook
Twitter
WhatsApp
Linkedin
Viber
Previous articleN DISPUTE OF A FABRICATED COUP RUMOR
Next article‘We’re not going to abandon you’: Defense minister Faye tells military they have the support of the whole country