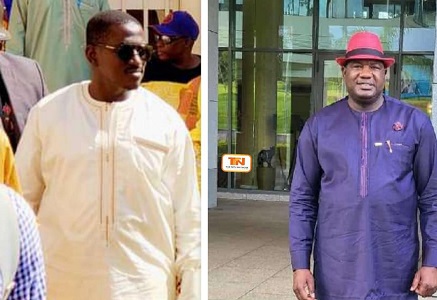 The pretrial in the defamation case involving renowned businessman, Abubacarr Jawara against the politician who also doubles as a political commentator, Momodou Sabally has begun at the High Court in Banjul after the defendant filed an affidavit in opposition to the plaintiff’s claims. Jawara seeks D8 million in damages for defamation and slander.

The plaintiff, represented by Counsel Drammeh told the court that they have eight documents to tender including a warning letter which was admitted and marked as exhibit PF1.

The plaintiff said they have four audios with their transcriptions to tender. Copies of each of the audios were given to the defendant’s lawyers and the judge.

The first audio amongst the four to be played in the court was that of a man called Saibo Hydara who was among other things, threatening Jawara for taking Sabally to court.

That audio was rejected in Justice Bakre’s ruling after arguments between the two lawyers about its admissibility. It was supposed to be accompanied by a certificate, the judge ruled, agreeing with Counsel Fatty’s argument. However, the audio transcription was admitted and marked as PF2.

The case was adjourned to tomorrow 18th January for the continuation of the pre-trial.

Meanwhile, before the pre-trial began, the lawyer for the plaintiff stood up to claim that some paragraphs in the defendant’s affidavit in opposition to their claims were unnecessarily long, suggesting that some of them should be struck out.

The judge, Justice Bakre, who said he was yet to read the statement told the defendant’s lawyer, Counsel Fatty, that because they are lawyers doesn’t mean that they have to mystify things so much so that those who are not versed in law cannot understand.

He asked Counsel Fatty if they would reconsider their defence or if he (the judge) would strike out some paragraphs he deems unnecessary.

The defendant, on the other hand, submitted that he was familiar with the rules and that the defendant has the right to know how they want to present their facts.

Counsel Fatty’s argument was defamation is serious and they, therefore, need to be careful in presenting their case.

The plaintiff will formally apply for the striking out of some paragraphs, Counsel Drammeh said.

Momodou Sabally, the defendant, was served with a writ of summon last month to answer a suit filed by Jawara. The plaintiff, Abubacarr Jawara seeks D8 million in damages for defamation and slander.