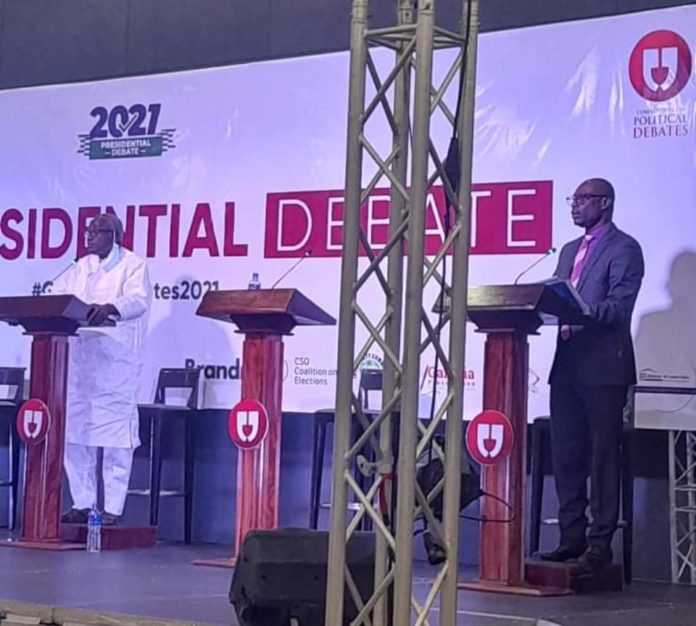 Special commendation to Commission on Political Debates (CPD) for hosting the first-ever true presidential debate because the debaters were indeed the actual candidates and not their representatives. For that matter, kudos to Halifa Sallah and Essa Faal for showing up and presenting their case and challenging each other as is expected. Both candidates were indeed passionate and forceful in presenting their case to convince citizens that one is better than the other.

Thus, contrary to other views, I find the tempo, attitudes and words of both Halifa and Essa to be appropriate. Their veiled and open attacks, the condescension, humour and the sarcasm and their underhand jabs are all common to debates and necessary for citizens to see and know who is who. Their interactions help to expose the quality of their ideas and policies and even their characters. This helps the listener to get more insight through their challenging each other’s ideas, rightly or wrongly. There was no indecency, hate, offensive or violence expression hence the debate was indeed fine. Halifa and Essa are therefore the winners of this debate.

This means the losers indeed are Adama Barrow, Ousainou Darboe, Mamma Kandeh and Abdoulie Jammeh. They did not only fail themselves and their parties but above all they also failed Gambians, woefully.

Yes, one can argue that a political debate has not much value to promote a candidate’s agenda because they hold rallies across the country anyway. Such a view is myopic and unproductive. A presidential debate is an organised event in which debaters also get their thoughts organised and present it in a methodical manner. Where a rally may be big but it does not necessarily have substance because generally there are no organised thoughts and coherent presentations and no one is holding anyone accountable for what comes out of these rallies. In our typical rallies, it is usually only supporters who attend amidst lot of fanfare.

A presidential debate is different. Not only do you have more audience in a presidential debate since it is on live television and livestreamed, but the debate is also led by professional moderators who pose relevant and analytical questions. Furthermore, the debate is watched by everyone especially by various experts from different fields such as law, economy, security, health or education, who now come to provide expert analysis and fact-check the debate for the better understanding of the rest of the population. With this, a presidential candidate has the benefit of swinging undecided voters to one side as well as pull voters from one side to another.

A presidential debate is therefore the biggest rally ever. It is an indispensable campaign tool that no smart politician who is convinced of the correctness of his or her ideas should miss. Apart from these benefits, a presidential debate is also about courage of candidates to face opponents, moderators and experts as well as the audience to articulate one’s ideas. While a political rally is a friendly environment, a political debate on the other hand is basically a confrontational and even hostile platform that requires courage, self-control and maturity to take part.

Furthermore, a political debate serves to promote political tolerance and reduce the incidence of violence as citizens can see how their respective candidates can stand together to exchange ideas without the use of hateful or violent speech. Thus, the culture of political debate is good for any democracy.

Therefore, the decision by Barrow, Darboe, Kandeh and Jammeh not to take part in this debate is inexcusable, unacceptable, cowardly and a demonstration of poor leadership. They have denied citizens immense opportunity to better know them and their ideas and help make informed choices. These candidates have therefore undermined both themselves and the progressive realisation of democracy and popular participation in this country. They have wasted the resources of CPD unnecessarily which have spent a lot to host this event. Above all, these candidates have denied Gambians to get to know and see, not only their agenda and ideas but also to know and see their character in such a confrontational environment.

I hope they will take part in the next debate!