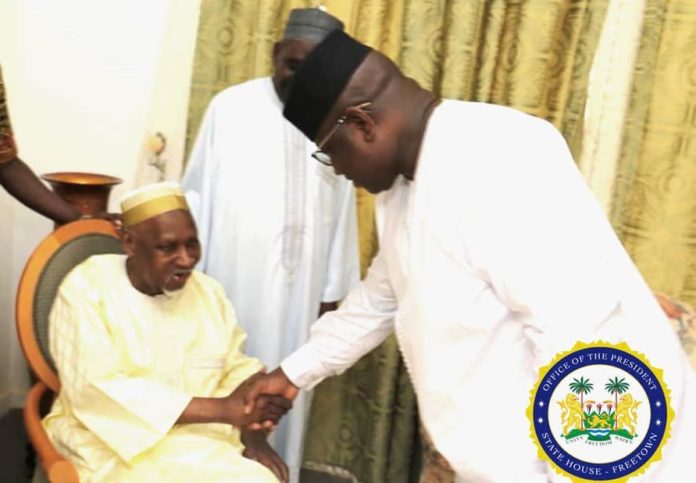 His Excellency President Julius Maada Bio has paid a courtesy call on Sir Dawda Kairaba Jawara, former President of the Republic of The Gambia.

The 95-year-old politician was a significant national leader, serving as the country’s Prime Minister from 1962 to 1970, and then as its first President from 1970 to 1994.

In his welcome statement, Sir Dawda Jawara said he was happy to receive the president of a country that shared a great history with The Gambia.

He noted that: “Sierra Leone and The Gambia have a long standing relationship that nobody can exactly explain how it all started. During my days in politics, the two countries witnessed a close tie that was beneficial. Education, farming and intermarriages were among the things that we can never forget in the two countries’ history.”

He further explained that the joy he’d received, during the visit of the Sierra Leonean President, was one that no man could ever imagine. He urged President Bio to keep close correspondence with the Gambian President, adding that the two countries had come a long way.

His Excellency President Julius Maada Bio showed appreciation to the former politician for his dynamic leadership, not only in his fight leading Gambia to independence but also for his contributions in shaping the political landscape of some former British West African states.

“My visit to The Gambia would not have been completed if I hadn’t paid you this visit. I appreciate your roles in building the strong ties between Sierra Leone and The Gambia, and I promise to do everything I can to widen and deepen the existing relationship,” President Bio said.