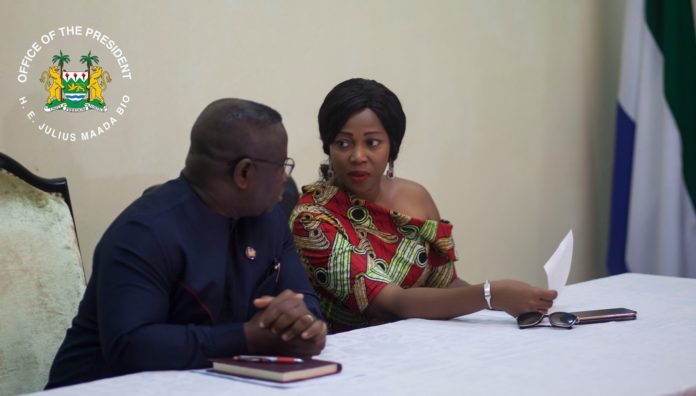 President Bio, today declared a National Emergency on rape and sexual base violence. This is in line with the President’s passion to empower and protect women, and also in response to the massive awareness campaign during the launch of the First Lady Fatima Maada Bio’s flagship programme themed “Hands Off Our Girls” in December 2018.

.
The historic peaceful protest march in December, organised by the Office of the First Lady, and Ministry of Social welfare, brought together First Ladies from different countries in Africa. The protest was against gender based violence, with emphasis on rape.

The issue was brought to the forefront of every government and non-governmental agencies. Child Right activists, organisations working for the protection of children, civil society organisations, the Sierra Leone Police and members of the fourth estate were further empowered to apply more pressure on the government.

Delivering her vote of thanks at the declaration ceremony, Her Excellency, Madam Fatima Bio expressed her appreciation to President Julius Maada Bio for listening to the voices of his people, while disclosing that, her “Hands Off Our Girls” campaign is a cause she championed to support the president’s agenda, as the issue of rape is a priority in the new direction.

She furthered that, rape is unacceptable and should be frowned at in society, while calling on women to not only help in the prosecution process, but to name and shame perpetrators found guilty before sending them to prison, as ‘We should not condole rapists, as they are bad people and what we should do is to name and shame them’, madam First Lady stated.

His excellency Rtd. Brig. Julius Maada Bio in his declaration speech, highlighted in addition to the National emergency on rape and sexual violence the following:

#Free medical services at all government hospitals for rape victims.

#The Hon. Chief Justice considers creating a special division with assigned judges to deal with cases of rape and sexual violence.

#The high court should consider the 136 proceedings in high court, in-order to speed up prosecution and trials in all new cases of rape and sexual violence.

#The law officers department should consider to charging all persons accused of rape and sexual violence with an additional offence of aggravated assault.

#A dedicated National emergency telephone number for reporting rape and sexual violence will be made available to the public in due course.

Madam Fatima Bio thanked the Rainbow initiative, Don Bosco Fambul, Family support unit and the Asmaa James Foundation for their unflinching support, while calling on women to champion the course for better result and in ensuring that the women and children of Sierra Leone have a safe haven.