President Barrow Calls for National Unity Ahead of December Election 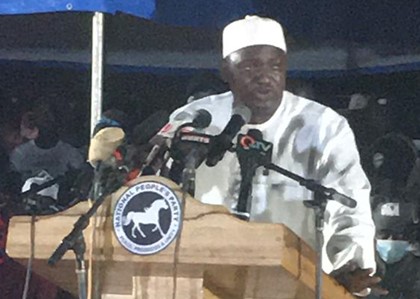 President Adama Barrow leader of the National People’s Party (NPP) has called for National Unity ahead of the forthcoming presidential election in December. The head of state was speaking at a campaign in Farafenni North Bank Region (NBR), where he called on citizens to embrace unity.

Addressing thousands of party supporters, Barrow says his campaign agenda is based on national interest and development.

“I will end opposition by unifying Gambians come December 4, 2021,” he said.

Barrow express appreciation for the candidates who endorsed his party and described their contribution as significant in the unification of the nation, urging citizens to rally behind him for national development.

“Whatever you do you should be transparent and that has reflected on our recent campaign,” Barrow said. Adding that Gambians are behind him. “No opposition can challenge us in this election.”

He said the opposition parties are now joining his party simply because they want the betterment of the country. Barrow promised to bring more development projects after the December presidential election.

“Many years have passed, and the capital was in a mess, but my government has changed it completely. Now you can walk in the streets of Banjul without any obstacles. My government is here to work and not just to give empty promises,” he emphasized.

However, he said the government cannot do it alone and called on citizens to contribute their part in developing the nation.

“I want us to join hands together and develop this country for the future generation,” President Adama Barrow said.

Hamat NK Bah minister of tourism and culture also described the president as a development-oriented leader. Bah added that Gambians should rally behind President Barrow for a better Gambia.

At Farafenni thousands of supporters turned out to express their support for the president.