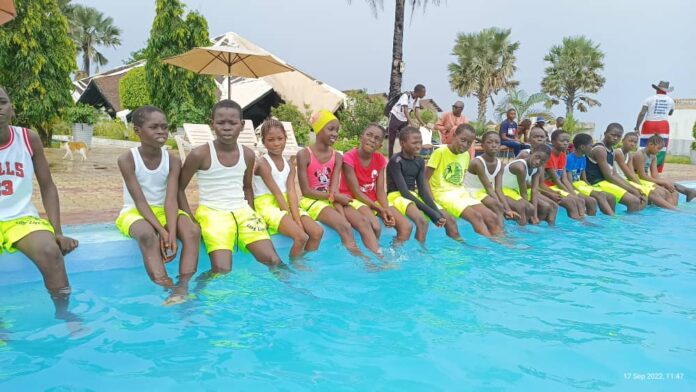 Designed to help curb drowning by learning to swim at a tender age, Swim For Life and its partners have today 17th September 2022 begun a six-week free swimming training for thirty (30) young Gambians aged 8-16 years at Sand Beach Resort in Kotu.

The training, which enters its fourth edition, trains children about swimming including first aid and rescue methods training.

In a ceremony that gathers parents, the kids dressed in colourful shorts as parents observe the first swimming session shortly after the opening ceremony.

Speaking at the opening of the fourth edition, the co-founder and Secretary General of Swim For Life, Sang Mendy, told the participants and their parents the rationale behind such a laudable initiative, saying it is a measure to curb child drowning.
Mr Mendy further told The Fatu Network that Swim For Life has two major objectives which are to introduce kids to swimming at a younger age as well as to introduce it as a game.

“We have two main objectives. One is to train young people to learn how to swim in a bid to curb drowning in the sea in the country. And the second objective is to introduce swimming as a sport to young people at a very tender age,” he revealed to TFN.

Swim For Life, has so far trained a total of one-hundred and two Gambian kids in the past three editions.

However, despite having the craving to train more kids about swimming as a sport and to curb drowning, Sang told this medium that their most enduring challenge is not about the management of the kids but finance. He revealed that the fund received for the fourth edition came from Norway. He narrated that he pays D75 per head for kids over ten years and D50 for those below ten in every training.

Caroline Mendy is a parent who, after sending her nephew to be part of the third edition, has now cemented her hope in the training by registering three young girls to be part of the fourth edition. She said she cannot swim and if a scenario of drowning occurred in her presence, she won’t be able to rescue the individual. However, she preferred her three girls to learn what she has no skills in.

The Gambia Swimming Association, Gambia Fire and Rescue Services, Gambia Tourism Board, and Ministry of Youth and Sports were all invited to grace the occasion but failed to turn up. Sang, however, expressed his dismay over that but remained committed to what he believes is the best.

The training of these kids will be in a course of six weeks at Sand Beach Hotel in Kotu.