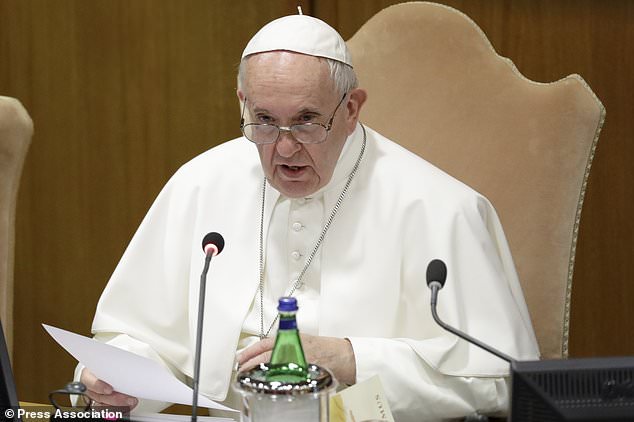 Pope Francis called for the closing of migrant detention camps in Libya on Thursday, saying they were rife with torture and slavery.

Francis, who has made defense of migrants and refugees a key part of his pontificate, made his comments in to a group of refugees, including women and children, brought to Italy by the Vatican from a transit camp on the Greek island of Lesbos.

“How can we fail to hear the cry of so many brothers and sisters who prefer to face a tempestuous sea rather than die slowly in Libyan detention camps, places of torture and ignoble slavery?” he said.

More than 5,000 refugees and migrants are held in 19 official detention facilities in Libya, some controlled by armed groups, as well as an unknown number in squalid centres run by traffickers, according to the United Nations.

“We need a serious commitment to empty out the detention camps in Libya, evaluating and activating all possible solutions,” Francis said, adding, without elaborating, that “complicity by institutions” should be denounced.

In September, prosecutors arrested three people, a Guinean and two Egyptians, suspected of torturing migrants in a detention center in northwest Libya. The three were found in a migrant registration center in Sicily.

Francis spoke sombrely as he unveiled a cross bearing a battered red life jacket that was used by an unknown migrant who drowned in the Mediterranean in July.

Detainees in the Libyan camps include those who left on boats for Europe and were brought back by the European Union- backed Libyan Coast Guard, according to the U.N. High Commissioner for Refugees (UNHCR).

More than 1,100 migrants have died or are missing at sea after attempting to cross the Mediterranean this year, according to the International Organization for Migration. The number of crossings dropped sharply from 2017 amid an EU backed push to block arrivals.

“The problem is not resolved by blocking boats,” Francis said, adding that this left them at the mercy of unscrupulous human traffickers. (Reuters)