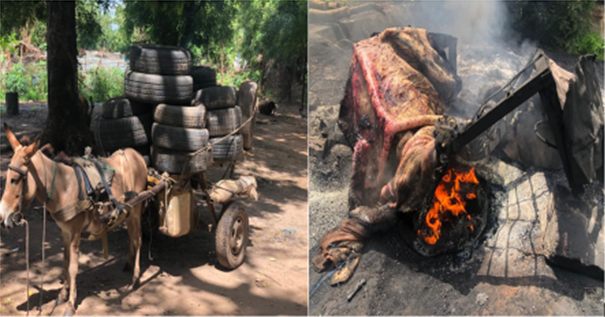 A joint operation by officials of the Food Safety and Quality Authority of The Gambia and the Police on Tuesday 21st June 2022 has led to the arrest of eight individuals behind the central abattoir in Abuko for allegedly using waste car tires to smoke cowhides, locally known as ‘cowcanda’.

The Food Safety and Quality Authority said it acted on a tipoff after a concerned consumer reported the unhealthy food preparation method which allegedly has been ongoing for some time now, exposing consumers to toxic chemicals that can cause serious health problems.

‘’Two men and six women are currently in police custody for allegedly using tires to smoke cowhides, otherwise called “cow canda” in our local dialects. The accused persons were arrested in an early morning raid while in the act at a deserted place behind the slaughterhouse in Abuko, on Tuesday 21st June 2022’’ – FSQA

Cow canda, as it is commonly called in the Gambia is used in the cooking of some Gambian delicacies like the famous okra and spinach stews. The processed cowhide is sold in local markets for onward distribution.

According to research, car tires contain numerous chemicals that are not only toxic but are also likely human carcinogens.

While the story is still developing, the Food Safety and Quality Authority says “efforts are already underway to issue corrective measures which will serve as a deterrent to the alleged offenders.”

FSQA in a statement reiterated the organization’s unalloyed resolve to clamp down on non-compliant food business operators in the country.