Playing Home Away From Home: Scorpions Begin Another AFCON Journey 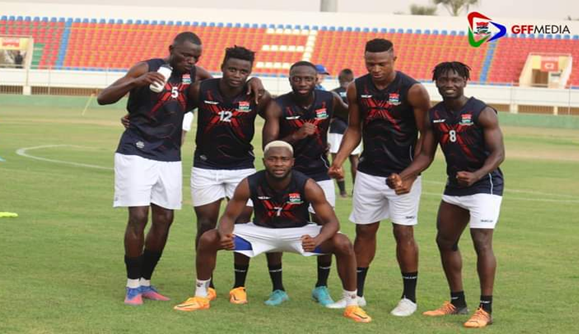 The scorpions of the Gambia will begin their 2023 Ivory Coast AFCON journey this afternoon in Thies when they face the Bright Stars of South Sudan. The red white blue green boys will be playing home but not in their home land as the country’s stadium continue to be unfit to host CAF and FIFA elite competitions.

Back from recording their first ever point against a non-African side last weekend in an international friendly with the  United Arab Emirates, Tom Sainfeit’s boys are the favourite on the paper after their recent exploits in Cameroon.

In January this year, the scorpions of the Gambia graced the pinnacle of African football showpiece in Cameroon and stunned football fanatics with stunning performances up to the last eight in the competition where they succumbed to a two-nil lost to the host country.

The competition was the debut appearance of the scorpions of the Gambia  in the competition after over five decades of unsuccessful attempts. A glittering performance in Cameroon earned the team a rousing and heroic welcome.

After experimenting the nation’s cup amazingly well, the Gambia is no more a minor in group G. The Scorpions are grouped alongside South Sudan, Mali and Congo. South Sudan, the Scorpion’s opponent, is the only country in the group that is yet to play in AFCON.

The head coach of the Gambia, To Sainfeit, despite losing three players due to passport issue and injuries, told the Fatu Network that they must win the game.

Ebrima Sohna,  an erstwhile  Gambian international footballer also spoke highly of these crop of players, noting that the bar is already high. He told TFN that the country has all that it takes to do better.  He predicted a 3-0 for the scorpions.

Scores of Gambian fans have crossed the Gambia-Senegal border to Stade lati dore in Thies to cheer up the scorpions.