PEACE in The Gambia – Are We Where We Think We Are? 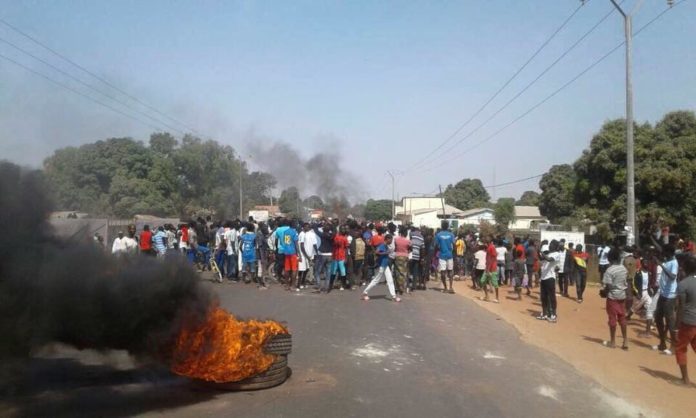 I am disheartened to see the recent ugly reports and footage of violence in Mankamang Kunda and Busumbala, The Gambia. Unsurprisingly, the online rhetoric has mostly been partisan, angry and murky, making it difficult to get a good understanding of what exactly transpired. Since that’s unclear to me, I will refrain from the finger-pointing by and at the different groups trying to control the narrative in favor of the party they support. This is not the first time such clashes have erupted between supporters of the current coalition government and supporters of the preceding APRC party. Since Gambians pride ourselves as being peaceful people, it is crucial that we confront this ugly problem and find lasting solutions to avert further threats of violence. This essay is an attempt to critically examine the Gambian situation from a Conflict Analyst’s perspective to try and figure out the underlying issues that give grounds for these undesired incidents. I will only stop at the diagnosis and hope that our leaders will take it from there and begin working on lasting solutions.

In his book, “Preventing Violent Conflict,” Michael Lund presents “Curve of Conflict,” showing that there are different phases in a changing relationship, ranging from “Durable Peace” at the base, all the way to “War” at the peak. In between the two extremes are phases known as “Stable Peace,” “Unstable Peace” and “Crisis”.

Lund defines “Unstable Peace” as “a situation in which tension and suspicion among parties run high, but violence is either absent or only sporadic. A ‘negative peace’ prevails because although armed force is not deployed [or employed], the parties perceive one another as enemies… A balance of power may discourage aggression, but crisis and war are still possible.” (USIP)

Many Gambians have always believed that we have always enjoyed an exceptional level of ‘peace and stability” that is unparalleled. This is mostly based on the fact that with the exception of the post-1981 coup attempt, we have largely avoided violent conflict, especially compared to some of the unfortunate scenes we saw some of our neighbors go through. We have been very fortunate and there’s no trivializing that.

However, observing The Gambian situation from a Conflict Analyst’s perspective reveals that we are only the 3rd best and not the 1st in our “class”. The country has been in a state of “Unstable Peace” for well over 2 decades. We can do better! Observing our situation, I would also also argue that contrary to what many would like to believe, removing the dictator moved us further up the curve towards “Crisis”, not down towards the desired “Stable Peace”  and “Durable Peace”. 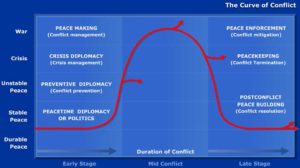 Recognizing and acknowledging that fact is crucial because it allows us to begin examining WHY we are in that situation. From there we can begin to figure out HOW we can work towards achieving the desired “Durable Peace”.

One can argue that there was Unstable Peace during the first republic under Jawara’s PPP, especially after the 1981 coup attempt. I have enough reasons to disagree and leave that discussion for another day. Today we will cover the period from 1994 to 2018.

AFPRC Rise to Power – To begin with, the AFPRC came to power by force. Although no blood was shed during their take over, the mere fact that this group of soldiers used violence to drive out a democratically elected government destabilized the country. Many supporters and beneficiaries, including the economic and political elites of the PPP regime understandably developed animosity towards the coupists. The AFPRC regime made no secret of their jealousy/hatred of those who were “enjoying” during PPP rule. Jobs were lost and properties seized. Because of the power imbalance, the “losers” could not fight back openly. Some went into exile, some jumped ship to join other parties including UDP and even APRC, and many others remained in the country, harboring deep-seated anger and hatred, hoping, waiting, or plotting for any opportunity to fight back. In addition, the successful military takeover of 1994 also showed other soldiers in the army that they too could become president in the same way. I’m confident that there were also some who felt that it was their duty to restore the democracy that had been stolen from Gambians. The many failed coup attempts that followed were a result of a combination of these factors.

APRC Oppression – Apart from their path to power, the way the AFPRC stayed in power also ensured we remained in a situation of unstable peace. In the face of blatant economic and financial mismanagement, gross human rights violations and a total disregard for the rule of law,  the people’s emotions remained bottled up. The swift and merciless crackdown on dissent forced people to leave the land and/or silently swallow their anger – again plotting in secret or patiently waiting for the slightest opportunity to strike. Events of December 30, 2014, when Gambians left comfortable lives in Europe and America to risk their lives attempting to remove the dictator is evidence of how desperate people were.

Other factors contributing to our unstable peace status have to do with the fact that we currently have a coalition government in charge. To begin with, the coalition government was rushed into formation. Leaders of the political parties, in their desperation to get rid of the dictator, realized that their greatest chance was to come together. This was done very hurriedly as evidenced by the lingering disputes between party leaders as to whether the President (UDP) will step down after 3 or 5 years, the outrage over the spokesperson; Halifa Sallah (PDOIS), opting to contest for a seat in the National Assembly instead of taking a Ministerial position; and the firing of the man who had fired and unfired him, Mai Fatty (GMC). These fractions show that the different coalition leaders do not trust each other and it can completely disintegrate at any time.

The inexperience of the Coalition government is another reason the peace we’re enjoying is so fragile.  None of the leaders, except OJ with PPP, has any experience being a part of governing team. If the poor handling of #OccupyWestfield (deny a permit, issue it and then revoke it) or the slow response time to the Busumbala and Mankamang Kunda incidents is not enough to convince you, then remembering that ECOMIG is still present in The Gambia should do the trick.

Just like the coalition leaders are divided, one must also realize that the nation is divided. The winning coalition candidate only beat second place APRC by less than 20,000 votes! This is a clear indication that for many the division is not limited to the internet. The coalition candidate was elected but many Gambians still support APRC, many support the UDP, PDOIS, GDP etc., while some are unsatisfied with any of the choices presented.

On top of all this is the instability and divisions in the military. To be able to remain in power for 22 years, dictator Jammeh must had control and loyalty within the army. Those folks loyal to him did not just disappear into thin air once the coalition took over. Many are still there and it would be naive to believe they all switched allegiance to the coalition government. They’ve tasted power. Who knows how many are just lurking in the shadows and waiting for an opportunity to strike?

The Elephant in the Room

Tribal and Regional Differences – In our typical “maslaha” fashion, we tell ourselves there are no social conflicts in The Gambia. Again, this is only relatively true because while we don’t have the wars in other countries, there is still some masked rivalry between different classes or sections of society. Online political discussion since the removal of the dictator has made it extremely difficult for us to deny that tribal tensions exist between Fulas vs Mandinaks, Jolas vs Mandinkas, and, between people who see themselves as coming from the urban areas vs people from the rural areas. Although we inter-marry and, to a large extent, get along relatively well, we see the cracks when challenges are presented in economic opportunities such as government hiring or during disagreements/disputes. Perhaps feeling threatened by the fact that his predecessor, Jawara, was Mandinka and that the Mandinkas were largest ethnic group in the country, the dictator never passed up on the opportunity to denigrate The Mandinkas. Of course this did not sit well with many and some see the removal of Jammeh as a time for them to recover the glory that was stolen from them. Voting patterns in the last elections also shows strong support for Mama Kandeh from the Fulas, Mandinkas for Barrow and the coalition, and the Jolas for Jammeh. A close following of the online rhetoric also supports this unscientific observation of the support for these three parties/leaders. These social tensions, especially because we usually brush them under the carpet rather than confront them head on, make the peace we enjoy very unstable and prone to flaring up.

None of the socio-economic development we aspire to is possible without peace. While we’ve survived over 2 decades in a phase of unstable peace, the size of our population, close relations and cultural dynamics mean that we cannot afford one week of sustained violent conflict in The Gambia. This means that we should not only jealously guard the peace we enjoy, we need to nurture it to reach a phase of durable peace. Our leaders need to understand our unique situation and devise strategies to actively work on healing old wounds, enhancing communications and rebuilding trust. President Barrow came into office enjoying a lot of goodwill. He needs to ride that wave and solicit the services of experts, engage youth leaders, religious leaders and community elders. The much talked-about Truth and Reconciliation Commission may not provide all the solutions, but it would be a good start.