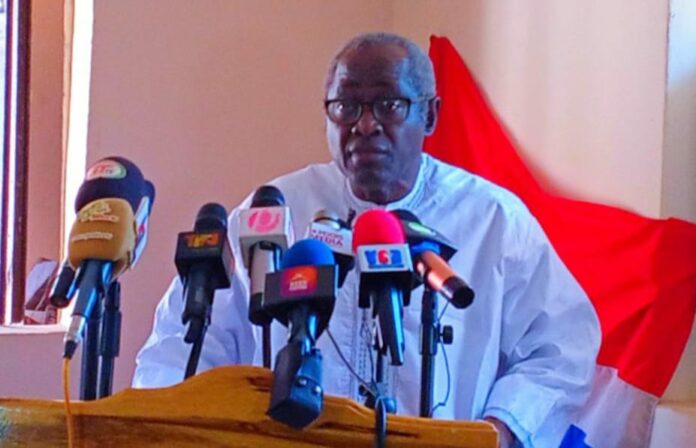 The party leader and Secretary General of People’s Democratic Organization for Independence and Socialism (PDOIS), Halifa Sallah, has blamed the government for neglecting the public sector doctors on the effects of Indian-made-syrups that killed over 80 Gambian children and urged the government to take the lead in following up with the Indian Maiden Pharmaceuticals Limited on why the syrups were made for The Gambia alone.

Halifa Sallah revealed the party’s position on the death of over 80 Gambian children from Acute Kidney Injury (AKI) in a press conference the party organized yesterday, October 19th.

The former National Assembly member for Serre Kunda Constituency said the issue of the syrups in the country is a result of the neglect of the public sector doctors who will work for different hospitals to earn more money. He encouraged the government to establish good payments for public sector doctors to effectively do their work.

“One thing that is clear is the neglect of public sector doctors. You will see them work, for the hospital and also go to the private sector to be able to earn more income. So, our emphasis is they should be properly remunerated and encourage rendering public services to our people.”

The opposition PDOIS party leader, while addressing the country’s challenges and ways forward, said the tragic death of over 80 Gambian children by AKI should be a clarion call for the government to well-equipped the medicine agency with proper materials that will properly test all medicinal products imported to the country. He emphasized that medicines that arrived in the country must be subjected to quality control.

Hon. Sallah, who is in transition to hand over the leadership of PDOIS to new breeds of leaders, said the government should lead the world in following the Indian Maiden pharmaceuticals Limited to find out why the syrups were made for The Gambia alone.  He added that the government should equally monitor children in the country and compensate families whose children died as a cause of the contaminated syrups.

“We must also be ready to follow that company which earns billions from different pharmaceutical products. But the information we have is that what was produced for The Gambia was specifically for The Gambia. Why was that the case? The WHO is there, the world is accompanying us, and our government must lead as quickly as possible and ensure that we must follow that company and continue to monitor the lives of our children to get the type of compensation for those families and our companies who may have imported those products so that the company will pay should something be found that they are a culprit,” the seasoned politician said.

The Indian-based pharmaceutical company has exported 50,000 bottles of contaminated syrups which have now killed over 80 children in the Gambia, according to the police preliminary investigative report.

The leadership of PDOIS call on the Government to investigate the current situation within two weeks to a month and come out with findings to address what has gone wrong regarding these syrups that have killed so many Gambian children.