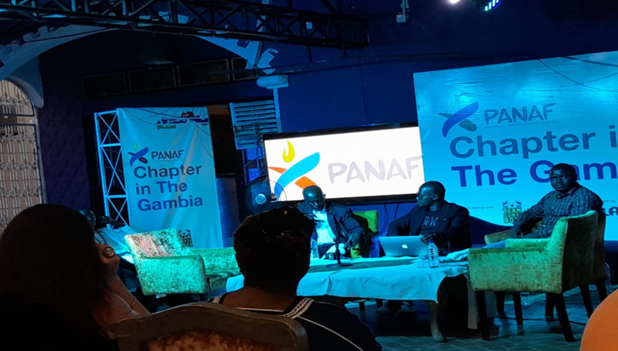 The Gambian chapter of Pan-African Network for Artistic Freedom (PANAF) was launched over the weekend to connect African artists and culture producers by defending artistic freedom through shared experiences.

The PANAF launch was spearheaded by SELAM and team GOMSA SA BOPA.

The main objective of PANAF is to build effectiveness in countries, regional and continental advocacy, and a sustainable network in music and film.

The network also aims at building knowledge among members on how to use international, regional and national human rights frameworks in advocacy for legal reforms, mechanisms protecting artists’ freedom and how to overcome structure, discrimination and barriers, especially for female artists.

Lucy Llado, the Regional Programme Director of SELAM, which is a pan-African cultural organization, said arts has always played a crucial role in the fight for freedom, human rights and democracy. But artists all over the world continue to come under attack.

“The pandemic period amplified this violation, from censorship to silence of criticism of not just art but also the media, and at most, when these violations occurred the victim will have little or no legal or paper support,” she explained.

Sanna Jawara, a cultural lawyer talked about the legal perspective on artistic freedom in the Gambia and he has said copyrights law covered the right to performances, fashion and creative industries in general.

“There is no future without creativity and in the Gambia, we have creativity but what is lacking is protection of copyright”,

He stated that the first law created in the world is the Status of Arms which was legislated by the British parliament in 1709, saying that since then up to date, the Gambia copyright is not felt because people feel there is no copyright protecting intellectual properties.

Matty Jobe, performing Arts Officer at the National Center for Art and Culture talked about the role of stakeholders in progressing artistic freedom. She said there are stakeholders in the country that can support the interest of the artists which will help them express themselves.

“We are tired of dialogue and workshops. It is better we use the resources  to help our artists to be more creative along with freedom”, she mentioned.

Pa Momodou Sarr, President of the Musicians Union of the Gambia said artists have been battling with the problem of conducive ground to put across what they have.

“We have been having this problem where musicians talk about things happening in our communities which have been turning out to be violent. Example, Killa Ace’s artistic freedom was violated because of one of his songs”, he explained.