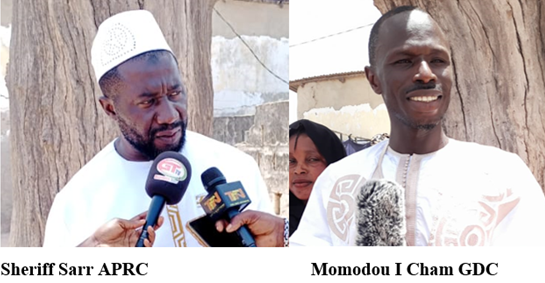 Candidates from the Gambia Democratic Congress (GDC) and Alliance for Patriotic Reorientation and Construction (APRC) have expressed disappointment over the low turnout of voters in the ongoing National Assembly Elections in their constituency.

Sheriff Sarr, the APRC and NPP alliance candidate and Momodou I Cham of Gambia Democratic Congress GDC were speaking to this medium at the Jeshwang constituency immediately after casting their votes.

Mr Sarr said even with the low turnout of voters he is still confident that he will win the seat in Jeshwang constituency. He further noted that he is expecting voters to come out around 3 to 5 pm to cast their votes.

“I am sure I will win as I served as a Councillor of Jeshwang ward and I brought a lot of projects for the development of the community,” he said.

Momodou I Cham of GDC vying for the same seat said his expectation from his constituents is high, indicating that he knows he has the support of the people.

Adding that he is disappointed with the turnout of voters in the constituency.

“I am hoping the voters will come in their numbers to vote before the end of the day,” he said, whilst expressing hope that he will win the Jeshwang Constituency Seat.