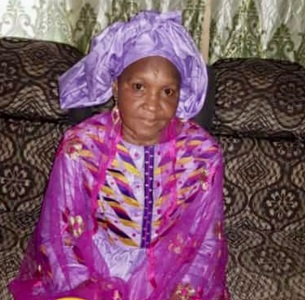 Oumou Bah was the big sister in the neighborhood in Basse. She had taken a liking to some of us, a group of young boys who grew up together. We had a tight-knit brotherhood and a soccer team. We mostly stayed out of trouble, but regularly drifted into childhood frivolities. Oumou would encourage us to study, to do our homework, to be serious about school. She had a great affinity for novels. At the family home, Oumou could be seen lounging around, reading a book. Or resting one on her lap —- perhaps taking a break from a long spell of intent reading.

Oumou was the quintessential bookworm. Perhaps, books more than humans enlivened her daily life during her younger years. Her bookishness went hand in pocket with her reclusiveness. She liked to stay indoors, after work, and during the weekend, that is.. She knew how to hoard herself from public sight.

Don’t misunderstand. Oumou’s reclusiveness had no arrogance or hostility to it. She was friendly. When she (rarely) came out of her room or the family home, her presence, even if transient, conveyed an infectious pleasantness. When you were in her orbit, it was near impossible to balk at her aura of civility. She was hard to despise.

In 2018, Oumou contacted me via Messenger: “Hi lil bro, how are you?,’’ she wrote. “It has been a while.’’ I was surprised. I didn’t expect her remembering, let alone contacting, me. I hadn’t seen her in several years, perhaps going as far back as 1995 when I last visited Basse, a year prior to my relocating to America.

“We are happy that you can now visit home,’’ Oumou told me during our phone conversations. “The neighborhood is waiting for you.” For political reasons, I couldn’t go to The Gambia during the Jammeh days. I finally did in 2019. Oumou was there in the neighborhood when I arrived. Once in a while, we would meet and chat about life, about the neighborhood, about our late mothers who did childhood together.

Oumou died yesterday morning in Basse. She had gone to the neighborhood shop to buy some milk for breakfast and when she returned home, she told family members that she was experiencing some respiratory distress. A taxi was called, and she was rushed to the Basse Health Center. She died shortly after arrival. Oumou had been asthmatic most of her life. Recently, she sought treatment in the Greater Banjul Area, where she spent about two months convalescing after a number of asthmatic exacerbations.

She returned to Basse about two weeks ago, convinced that she had been on the mend. She was hoping to start, in earnest, a new chapter in her life, following her recent retirement from public service.

Oumou was born in 1965 in Basse, where she attended St Joseph’s Primary School. She also attended Armitage High School. She spent a career working for the Department of Community Development. She traversed large swathes of The Gambia’s Upper River Region on her official motorcycle, talking to farmers, market women and local leaders.

She leaves behind three sons, one of whom lives in Germany.