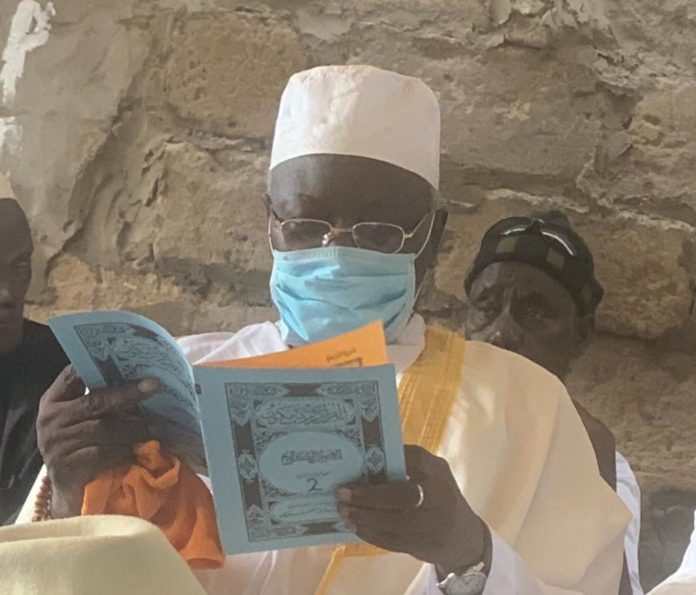 It was the great poet, Henry Wadsworth Longfellow, who famously penned this reassuring truth:

“Lives of great men all remind us

We can make our lives sublime,

And, departing, leave behind us

Footprints on the sands of time;”

This is the truth about all great men, but more so for those who took the decision to work and contribute to human progress through the profession of teaching. The late Imam Tafsirr Gaye has surely left his own footprints on the sands of our times and many of us will continue to see his brilliant footprints as guiding lighthouses and beacons of hope as we take our own paths towards self-actualisation and service to humanity.

The late Imam, a graduate of the prestigious Al-Ahzar University in Egypt, was a teacher of Islamic studies at many institutions, including, the famous Saint Augustine’s High School where his path crossed with that of my good friend Ebou Ndure (currently serving as Imam in Ireland).

Ebou and I met through a mutual friend, Omar Mbowe, while we both did our Advanced level studies in Banjul. At the time my desire for further Quranic studies was being kindled as I compared the effort I put into my regular academic studies against time spent on religious studies. I arrived at the conclusion that investing a maximum of 10 percent of the time and energy I devoted to school into the study of the Holy Quran would yield immeasurable dividend. My firenship with Ebou Ndure became the catalyst for me to embark on that Journey.

At the time, Ebou was very close to Imam Gaye and he was part of a group that would converge at the Imam’s house on weekly basis on Thursdays and Fridays in the evening at the Imam’s residence in Banjul, Lancaster street. I lived at Boxbar road and having finished my 6th form at Gambia High, I became a regular visitor for these sessions of studies and lectures with the Imam. Thursdays were for studying the Quran, especially for novices like myself; and on Fridays we would gather and the Imam would do a lecture-cum-sermon.

There were senior ‘talibes’ (students) there as well. Ustass Abdourahman Sowe was one of them; he was specifically assigned by the late Imam to give me intensive lessons in Arabic phonics so that I could speed up my learning of the Quran. By this time I had had many forays into Quranic studies but all such studies were on part time, mainly during weekends and evenings after school on week days. I had the privilege of studying with such luminaries like the late Pa Ablie of Primet Street, the late Ustass Babacarr Njone, and the master of the traditional Quranic school in Lamin, the late Jamanty Jammeh. May Allah grant them all His eternal Grace and Mercy.

My studies with Imam Tafsir Gaye became a huge catalyst for the life-long Quranic studies I was to embark on. After a few weeks, I had grasped a good mastery of the Arabic phonics and with encouragement and consistent support from my friend Imam Ebou Ndure I gradually became quite well efficient with recitation of the Holy Quran in the original Arabic text.

It was a blessing to sit before Imam Tafsir Gaye and listen to him preach about Islam. His understanding of the religion, coupled with his eloquence and peerless wit was awe-inspiring. He always had a unique way of explaining the deeper meanings of the Quranic verses. His insight into current issues were also enlightening. Throughout those lesssons, his love of the late Imam Ratib Abdoulie Jobe always manifested itself.

Anytime I listened to Imam Gaye make a speech, my respect and admiration for his intellectual dexterity increased. He always rose to the occasion with the perfect witty aphorisms to match the situation being addressed. And thus I was as much amazed by what he said as I was curious about how much more wisdom I could still tap from his inexorable intellectual endowment.

This morning, I went into my electronic archives to retrieve the video of my graduation from the Gambia’s first ever university programme. Imam Tafsirr Gaye was the one to have had the honour to bless that occasion. Clad in a gown, he delivered a beautiful prayer that would touch even those of us who could not understand the Arabic language. He had a gift of oratory; his words came out with a unique cadence.

My first encounter with the late Imam was an occasion about the Quran; my own reinvented journey with the Greatest Book of all times. My last encounter with him was also about the Quran. We had converged at the residence of the late legendary football hero Biri to recite the Quran as part of the rites of his demise. Let me clarify here that the late Imam was properly clad with a protective mask and the gathering was not a big one.

I took several pictures of him from a distance. It was a pleasure to see him hold the Quran, reading it. And he was granted the honour of reciting the prayer that caps off the recitation of the ‘Qamil’ called the ‘khatm’; at the end of the ceremony the Imam Ratib of Banjul, Imam Cherno Kah, gave some words of advice concerning the need for unity in the country as he decried inflammatory and derogatory speeches in our current political debates. He then asked Imam Gaye to also give some words of advice regarding that matter.

I was all ears when Imam Tafsir Gaye started speaking. And surely I was not disappointed. He reiterated the Imam Ratib’s admonition and then made reference to verses 13-14 of the 17th chapter of the Quran: “And We have made every man’s actions to cling to his neck, and We will bring forth to him on the resurrection day a book which he will find wide open: Read your book; your own self is sufficient as a reckoner against you this day.”

You just had to hear the late Imam’s inspiring enunciation of the foregoing pair of verses in Arabic to be able to fully appreciate what he was saying. Yet his explanation of the first verse in Wolof was equally amazing. He warned us that the modern microphones that media practitioners would clip to our shirts close to our necks is quite emblematic of the statement “And We have made every man’s actions to cling to his neck…” he then advised that people should speak words of truth with decency and respect.

His speech was so touching and profound that I wanted to write an essay about it. My reverence and love for the Quran would not allow me to jump into such an assignment without some more research. I went home and recited the full Chapter (Surah Isra) from which the late Imam quoted that verse just to have a better appreciation. I shared the relevant verse on social media and I kept meditating about it but never got to have enough time to write an essay.

As the late Imam Tafsir Gaye begins his journey into the next world, his Quranic quotations and witty statements will continue to reecho in my mind and heart, inshaa Allah.

They will continue to be useful gems in my mission of education and inspiring young people around the world. Hopefully, those youths would make good use of the little I was able to gather from the immense reservoir of knowledge that was Imam Tafsir Gaye. I would continue to use some of these guiding principles in my own affairs. And that is the beauty of having been blessed with the company of enlightened beings like Imam Gaye. May Allah illuminate his path with the light of the Quran and grant him blissful repose in Jannatul Firdaus.

Truly he did his work and we shall continue to pray for Allah to shower him with His Grace and Mercy as we take inspiration from the footprints he left behind; in the words of Henry Wadsworth Longfellow:

“Footprints, that perhaps another,

A forlorn and shipwrecked brother,

Share
Facebook
Twitter
WhatsApp
Linkedin
Viber
Previous articleEbrima Sanneh escapes being seized as a group of unidentified men allegedly attacks him while leaving his friend’s house
Next articleThe Jawara Administration was a Moonwalk: shall we tell Papa Njie?